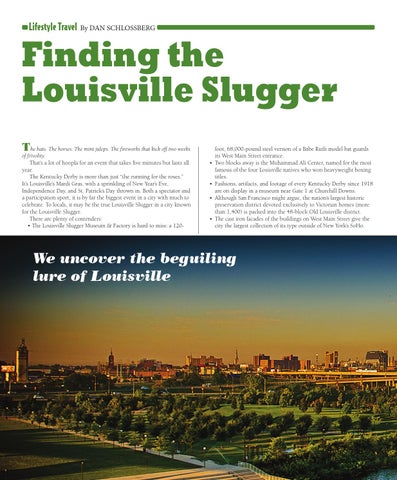 Finding the Louisville Slugger The hats. The horses. The mint juleps. The fireworks that kick off two weeks

of frivolity. That’s a lot of hoopla for an event that takes five minutes but lasts all year. The Kentucky Derby is more than just “the running for the roses.” It’s Louisville’s Mardi Gras, with a sprinkling of New Year’s Eve, Independence Day, and St. Patrick’s Day thrown in. Both a spectator and a participation sport, it is by far the biggest event in a city with much to celebrate. To locals, it may be the true Louisville Slugger in a city known for the Louisville Slugger. There are plenty of contenders: • The Louisville Slugger Museum & Factory is hard to miss: a 120-

foot, 68,000-pound steel version of a Babe Ruth model bat guards its West Main Street entrance. • Two blocks away is the Muhammad Ali Center, named for the most famous of the four Louisville natives who won heavyweight boxing titles. • Fashions, artifacts, and footage of every Kentucky Derby since 1918 are on display in a museum near Gate 1 at Churchill Downs. • Although San Francisco might argue, the nation’s largest historic preservation district devoted exclusively to Victorian homes (more than 1,400) is packed into the 48-block Old Louisville district. • The cast iron facades of the buildings on West Main Street give the city the largest collection of its type outside of New York’s SoHo.

We uncover the beguiling lure of Louisville