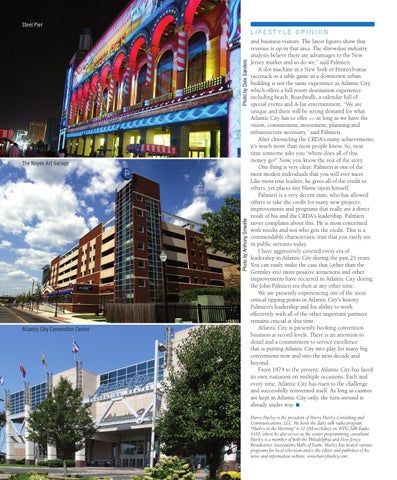 and business visitors. The latest figures show that revenue is up in that area. The shrewdest industry analysts believe there are advantages to the New Jersey market and so do we,” said Palmieri. A slot machine in a New York or Pennsylvania racetrack or a table game in a downtown urban building is not the same experience as Atlantic City, which offers a full resort destination experience including beach, Boardwalk, a calendar full of special events and A-list entertainment. “We are unique and there will be strong demand for what Atlantic City has to offer — as long as we have the vision, commitment, investment, planning and infrastructure necessary,” said Palmieri. After chronicling the CRDA's many achievements, it's much more than most people know. So, next time someone asks you “where does all of this money go?” Now, you know the rest of the story. One thing is very clear: Palmieri is one of the most modest individuals that you will ever meet. Like most true leaders, he gives all of the credit to others, yet places any blame upon himself. Palmieri is a very decent man, who has allowed others to take the credit for many new projects, improvements and programs that really are a direct result of his and the CRDA's leadership. Palmieri never complains about this. He is most concerned with results and not who gets the credit. This is a commendable characteristic trait that you rarely see in public servants today. I have aggressively covered every era of leadership in Atlantic City during the past 25 years. You can easily make the case that (other than the Gormley era) more positive attractions and other improvements have occurred in Atlantic City during the John Palmieri era then at any other time. We are presently experiencing one of the most critical tipping points in Atlantic City's history. Palmieri's leadership and his ability to work effectively with all of the other important partners remains crucial at this time. Atlantic City is presently booking convention business at record levels. There is an attention to detail and a commitment to service excellence that is putting Atlantic City into play for many big conventions now and into the next decade and beyond. From 1874 to the present, Atlantic City has faced its own ruination on multiple occasions. Each and every time, Atlantic City has risen to the challenge and successfully reinvented itself. As long as casinos are kept in Atlantic City-only, the turn-around is already under way. n Harry Hurley is the president of Harry Hurley Consulting and Communications, LLC. He hosts the daily talk radio program "Hurley in the Morning" 6-10 AM weekdays on WPG Talk Radio 1450, where he also serves as the senior programming consultant. Hurley is a member of both the Philadelphia and New Jersey Broadcaster Associations Halls of Fame. Hurley has hosted various programs for local television and is the editor and publisher of his news and information website, www.harryhurley.com.