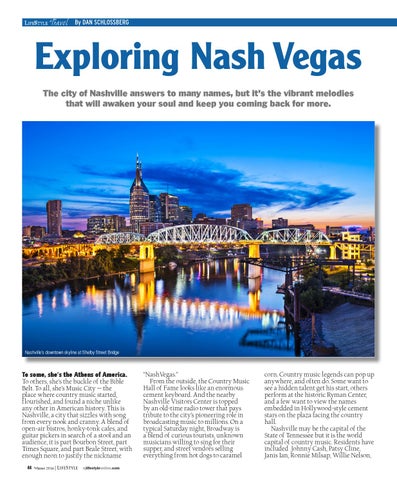 Exploring Nash Vegas The city of Nashville answers to many names, but it’s the vibrant melodies that will awaken your soul and keep you coming back for more.

To some, she’s the Athens of America.

To others, she’s the buckle of the Bible Belt. To all, she’s Music City — the place where country music started, flourished, and found a niche unlike any other in American history. This is Nashville, a city that sizzles with song from every nook and cranny. A blend of open-air bistros, honky-tonk cafes, and guitar pickers in search of a stool and an audience, it is part Bourbon Street, part Times Square, and part Beale Street, with enough neon to justify the nickname 44

“NashVegas.” From the outside, the Country Music Hall of Fame looks like an enormous cement keyboard. And the nearby Nashville Visitors Center is topped by an old-time radio tower that pays tribute to the city’s pioneering role in broadcasting music to millions. On a typical Saturday night, Broadway is a blend of curious tourists, unknown musicians willing to sing for their supper, and street vendors selling everything from hot dogs to caramel

corn. Country music legends can pop up anywhere, and often do. Some want to see a hidden talent get his start, others perform at the historic Ryman Center, and a few want to view the names embedded in Hollywood-style cement stars on the plaza facing the country hall. Nashville may be the capital of the State of Tennessee but it is the world capital of country music. Residents have included Johnny Cash, Patsy Cline, Janis Ian, Ronnie Milsap, Willie Nelson,