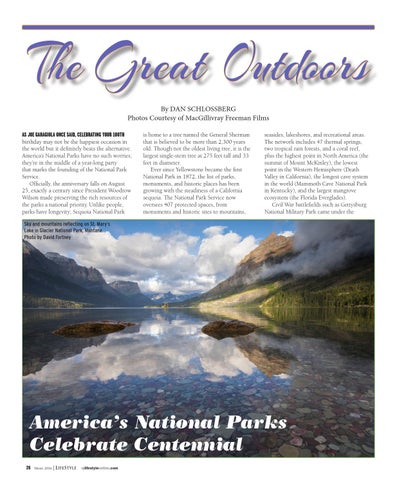 The Great Outdoors By DAN SCHLOSSBERG Photos Courtesy of MacGillivray Freeman Films AS JOE GARAGIOLA ONCE SAID, CELEBRATING YOUR 100TH birthday may not be the happiest occasion in the world but it definitely beats the alternative. America’s National Parks have no such worries; they’re in the middle of a year-long party that marks the founding of the National Park Service. Officially, the anniversary falls on August 25, exactly a century since President Woodrow Wilson made preserving the rich resources of the parks a national priority. Unlike people, parks have longevity; Sequoia National Park

is home to a tree named the General Sherman that is believed to be more than 2,300 years old. Though not the oldest living tree, it is the largest single-stem tree at 275 feet tall and 33 feet in diameter. Ever since Yellowstone became the first National Park in 1872, the list of parks, monuments, and historic places has been growing with the steadiness of a California sequoia. The National Park Service now oversees 407 protected spaces, from monuments and historic sites to mountains,

seasides, lakeshores, and recreational areas. The network includes 47 thermal springs, two tropical rain forests, and a coral reef, plus the highest point in North America (the summit of Mount McKinley), the lowest point in the Western Hemisphere (Death Valley in California), the longest cave system in the world (Mammoth Cave National Park in Kentucky), and the largest mangrove ecosystem (the Florida Everglades). Civil War battlefields such as Gettysburg National Military Park came under the