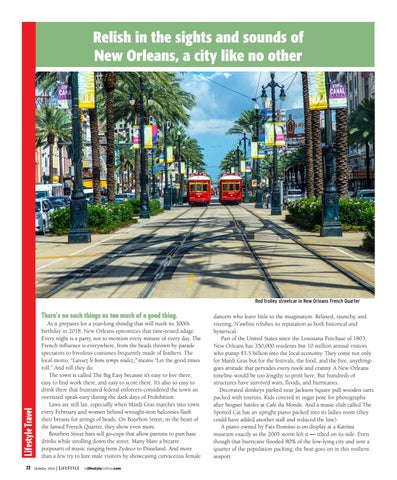 Relish in the sights and sounds of New Orleans, a city like no other

There’s no such things as too much of a good thing.

As it prepares for a year-long shindig that will mark its 300th birthday in 2018, New Orleans epitomizes that time-tested adage. Every night is a party, not to mention every minute of every day. The French influence is everywhere, from the beads thrown by parade spectators to frivolous costumes frequently made of feathers. The local motto, “Laissez le bons temps roulez,” means “Let the good times roll.” And roll they do. The town is called The Big Easy because it’s easy to live there, easy to find work there, and easy to score there. It’s also so easy to drink there that frustrated federal enforcers considered the town an oversized speak-easy during the dark days of Prohibition. Laws are still lax, especially when Mardi Gras marches into town every February and women behind wrought-iron balconies flash their breasts for strings of beads. On Bourbon Street, in the heart of the famed French Quarter, they show even more. Bourbon Street bars sell go-cups that allow patrons to purchase drinks while strolling down the street. Many blare a bizarre potpourri of music ranging from Zydeco to Dixieland. And more than a few try to lure male visitors by showcasing curvaceous female Holiday 2016 |

dancers who leave little to the imagination. Relaxed, raunchy, and riveting, N’awlins relishes its reputation as both historical and hysterical. Part of the United States since the Louisiana Purchase of 1803, New Orleans has 350,000 residents but 10 million annual visitors who pump $5.5 billion into the local economy. They come not only for Mardi Gras but for the festivals, the food, and the free, anythinggoes attitude that pervades every nook and cranny. A New Orleans timeline would be too lengthy to print here. But hundreds of structures have survived wars, floods, and hurricanes. Decorated donkeys parked near Jackson Square pull wooden carts packed with tourists. Kids covered in sugar pose for photographs after beignet battles at Café du Monde. And a music club called The Spotted Cat has an upright piano packed into its ladies room (they could have added another stall and reduced the line). A piano owned by Fats Domino is on display at a Katrina museum exactly as the 2005 storm left it — tilted on its side. Even though that hurricane flooded 80% of the low-lying city and sent a quarter of the population packing, the beat goes on in this resilient seaport.