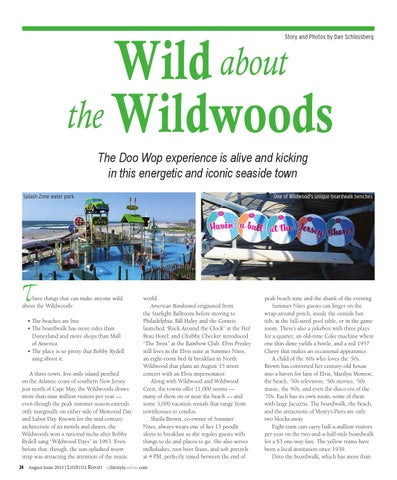 Wild about the Wildwoods

Story and Photos by Dan Schlossberg

hree things that can make anyone wild about the Wildwoods: • The beaches are free. • The boardwalk has more rides than Disneyland and more shops than Mall of America. • The place is so pretty that Bobby Rydell sang about it. A three-town, five-mile island perched on the Atlantic coast of southern New Jersey just north of Cape May, the Wildwoods draws more than nine million visitors per year — even though the peak summer season extends only marginally on either side of Memorial Day and Labor Day. Known for the mid-century architecture of its motels and diners, the Wildwoods won a national niche after Bobby Rydell sang “Wildwood Days” in 1963. Even before that, though, the sun-splashed resort strip was attracting the attention of the music

One of Wildwood's unique boardwalk benches

world. American Bandstand originated from the Starlight Ballroom before moving to Philadelphia; Bill Haley and the Comets launched “Rock Around the Clock” at the Hof Brau Hotel; and Chubby Checker introduced “The Twist” at the Rainbow Club. Elvis Presley still lives in the Elvis suite at Summer Nites, an eight-room bed & breakfast in North Wildwood that plans an August 15 street concert with an Elvis impersonator. Along with Wildwood and Wildwood Crest, the towns offer 11,000 rooms — many of them on or near the beach — and some 3,000 vacation rentals that range from townhouses to condos. Sheila Brown, co-owner of Summer Nites, always wears one of her 13 poodle skirts to breakfast as she regales guests with things to do and places to go. She also serves milkshakes, root beer floats, and soft pretzels at 4 PM, perfectly timed between the end of

peak beach time and the shank of the evening. Summer Nites guests can linger on the wrap-around porch, inside the outside hot tub, at the full-sized pool table, or in the game room. There’s also a jukebox with three plays for a quarter, an old-time Coke machine where one thin dime yields a bottle, and a red 1957 Chevy that makes an occasional appearance. A child of the ‘60s who loves the ‘50s, Brown has converted her century-old house into a haven for fans of Elvis, Marilyn Monroe, the beach, ‘50s television, ‘50s movies, ‘50s music, the ‘60s, and even the disco era of the ‘70s. Each has its own room, some of them with large Jacuzzis. The boardwalk, the beach, and the attractions of Morey’s Piers are only two blocks away. Eight tram cars carry half-a-million visitors per year on the two-and-a-half-mile boardwalk for a $3 one-way fare. The yellow trams have been a local institution since 1939. Ditto the boardwalk, which has more than