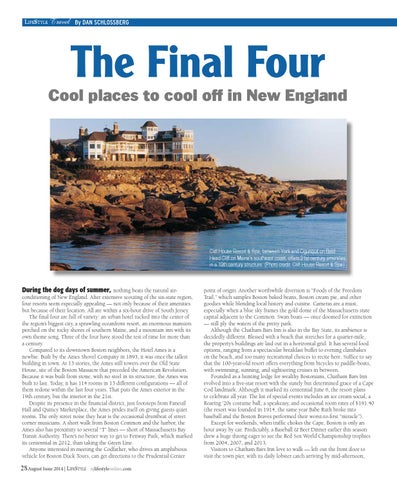 Cool places to cool off in New England

During the dog days of summer, nothing beats the natural airconditioning of New England. After extensive scouting of the six-state region, four resorts seem especially appealing — not only because of their amenities but because of their location. All are within a six-hour drive of South Jersey. The final four are full of variety: an urban hotel tucked into the center of the region’s biggest city, a sprawling oceanfront resort, an enormous mansion perched on the rocky shores of southern Maine, and a mountain inn with its own theme song. Three of the four have stood the test of time for more than a century. Compared to its downtown Boston neighbors, the Hotel Ames is a newbie. Built by the Ames Shovel Company in 1893, it was once the tallest building in town. At 13 stories, the Ames still towers over the Old State House, site of the Boston Massacre that preceded the American Revolution. Because it was built from stone, with no steel in its structure, the Ames was built to last. Today, it has 114 rooms in 13 different configurations — all of them redone within the last four years. That puts the Ames exterior in the 19th century, but the interior in the 21st. Despite its presence in the financial district, just footsteps from Faneuil Hall and Quincy Marketplace, the Ames prides itself on giving guests quiet rooms. The only street noise they hear is the occasional drumbeat of street corner musicians. A short walk from Boston Common and the harbor, the Ames also has proximity to several “T” lines — short of Massachusetts Bay Transit Authority. There’s no better way to get to Fenway Park, which marked its centennial in 2012, than taking the Green Line. Anyone interested in meeting the Codfather, who drives an amphibious vehicle for Boston Duck Tours, can get directions to the Prudential Center

point of origin. Another worthwhile diversion is “Foods of the Freedom Trail,” which samples Boston baked beans, Boston cream pie, and other goodies while blending local history and cuisine. Cameras are a must, especially when a blue sky frames the gold dome of the Massachusetts state capital adjacent to the Common. Swan boats — once doomed for extinction — still ply the waters of the pretty park. Although the Chatham Bars Inn is also in the Bay State, its ambience is decidedly different. Blessed with a beach that stretches for a quarter-mile, the property’s buildings are laid out in a horizontal grid. It has several food options, ranging from a spectacular breakfast buffet to evening clambakes on the beach, and too many recreational choices to recite here. Suffice to say that the 100-year-old resort offers everything from bicycles to paddle-boats, with swimming, sunning, and sightseeing cruises in between. Founded as a hunting lodge for wealthy Bostonians, Chatham Bars Inn evolved into a five-star resort with the stately but determined grace of a Cape Cod landmark. Although it marked its centennial June 6, the resort plans to celebrate all year. The list of special events includes an ice cream social, a Roaring ‘20s costume ball, a speakeasy, and occasional room rates of $191.40 (the resort was founded in 1914, the same year Babe Ruth broke into baseball and the Boston Braves performed their worst-to-first “miracle”). Except for weekends, when traffic chokes the Cape, Boston is only an hour away by car. Predictably, a Baseball & Beer Dinner earlier this season drew a huge throng eager to see the Red Sox World Championship trophies from 2004, 2007, and 2013. Visitors to Chatham Bars Inn love to walk — left out the front door to visit the town pier, with its daily lobster catch arriving by mid-afternoon,