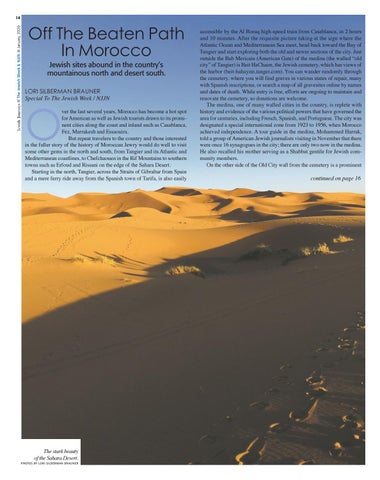 Off The Beaten Path In Morocco Jewish sites abound in the country’s mountainous north and desert south.

ver the last several years, Morocco has become a hot spot for American as well as Jewish tourists drawn to its prominent cities along the coast and inland such as Casablanca, Fez, Marrakesh and Essaouira. But repeat travelers to the country and those interested in the fuller story of the history of Moroccan Jewry would do well to visit some other gems in the north and south, from Tangier and its Atlantic and Mediterranean coastlines, to Chefchaouen in the Rif Mountains to southern towns such as Erfoud and Rissani on the edge of the Sahara Desert. Starting in the north, Tangier, across the Straits of Gibraltar from Spain and a mere ferry ride away from the Spanish town of Tarifa, is also easily

The stark beauty of the Sahara Desert.

accessible by the Al Boraq high-speed train from Casablanca, in 2 hours and 10 minutes. After the requisite picture taking at the sign where the Atlantic Ocean and Mediterranean Sea meet, head back toward the Bay of Tangier and start exploring both the old and newer sections of the city. Just outside the Bab Mericain (American Gate) of the medina (the walled “old city” of Tangier) is Beit HaChaim, the Jewish cemetery, which has views of the harbor (beit-hahayim.tanger.com). You can wander randomly through the cemetery, where you will find graves in various states of repair, many with Spanish inscriptions, or search a map of all gravesites online by names and dates of death. While entry is free, efforts are ongoing to maintain and renovate the cemetery, so donations are welcome. The medina, one of many walled cities in the country, is replete with history and evidence of the various political powers that have governed the area for centuries, including French, Spanish, and Portuguese. The city was designated a special international zone from 1923 to 1956, when Morocco achieved independence. A tour guide in the medina, Mohammed Harrak, told a group of American-Jewish journalists visiting in November that there were once 16 synagogues in the city; there are only two now in the medina. He also recalled his mother serving as a Shabbat gentile for Jewish community members. On the other side of the Old City wall from the cemetery is a prominent 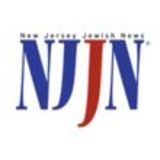