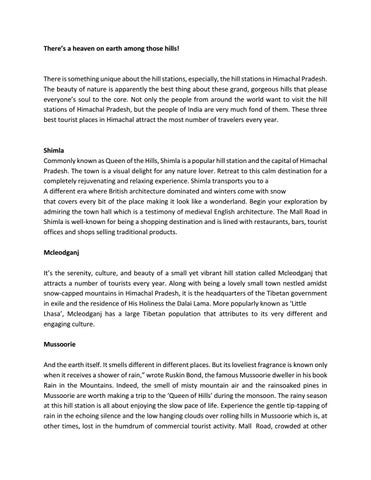 Shimla Commonly known as Queen of the Hills, Shimla is a popular hill station and the capital of Himachal Pradesh. The town is a visual delight for any nature lover. Retreat to this calm destination for a completely rejuvenating and relaxing experience. Shimla transports you to a A different era where British architecture dominated and winters come with snow that covers every bit of the place making it look like a wonderland. Begin your exploration by admiring the town hall which is a testimony of medieval English architecture. The Mall Road in Shimla is well-known for being a shopping destination and is lined with restaurants, bars, tourist offices and shops selling traditional products. Mcleodganj It’s the serenity, culture, and beauty of a small yet vibrant hill station called Mcleodganj that attracts a number of tourists every year. Along with being a lovely small town nestled amidst snow-capped mountains in Himachal Pradesh, it is the headquarters of the Tibetan government in exile and the residence of His Holiness the Dalai Lama. More popularly known as ‘Little Lhasa’, Mcleodganj has a large Tibetan population that attributes to its very different and engaging culture. Mussoorie And the earth itself. It smells different in different places. But its loveliest fragrance is known only when it receives a shower of rain,” wrote Ruskin Bond, the famous Mussoorie dweller in his book Rain in the Mountains. Indeed, the smell of misty mountain air and the rainsoaked pines in Mussoorie are worth making a trip to the ‘Queen of Hills’ during the monsoon. The rainy season at this hill station is all about enjoying the slow pace of life. Experience the gentle tip-tapping of rain in the echoing silence and the low hanging clouds over rolling hills in Mussoorie which is, at other times, lost in the humdrum of commercial tourist activity. Mall Road, crowded at other

times, makes for an enjoyable walk during this ‘slow season’. Stalls selling popcorn, momos, piping hot chai and bhutta (corn on the cob) far outnumber those selling knick-knacks. On a monsoon trip to Mussoorie, you’ll frequently encounter a rapid appearance of fog that is the warning sign of the impending downpour. 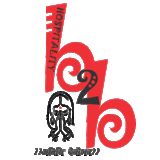 The beauty of nature is apparently the best thing about these grand, gorgeous hills that please everyone’s soul to the core. Not only the pe...

The beauty of nature is apparently the best thing about these grand, gorgeous hills that please everyone’s soul to the core. Not only the pe...