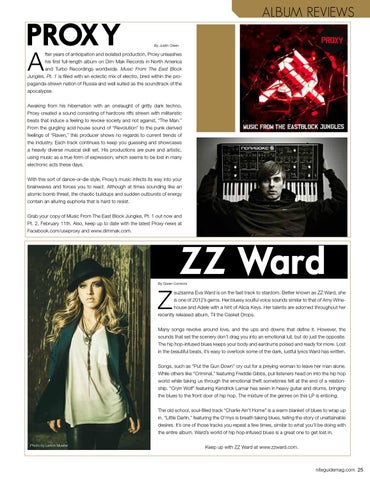 fter years of anticipation and isolated production, Proxy unleashes his first full-length album on Dim Mak Records in North America and Turbo Recordings worldwide. Music From The East Block Jungles, Pt. 1 is filled with an eclectic mix of electro, bred within the propaganda-strewn nation of Russia and well suited as the soundtrack of the apocalypse. Awaking from his hibernation with an onslaught of gritty dark techno, Proxy created a sound consisting of hardcore riffs strewn with militaristic beats that induce a feeling to revoke society and riot against, “The Man.” From the gurgling acid house sound of “Revolution” to the punk derived feelings of “Raven,” this producer shows no regards to current trends of the industry. Each track continues to keep you guessing and showcases a heavily diverse musical skill set. His productions are pure and artistic, using music as a true form of expression, which seems to be lost in many electronic acts these days. With this sort of dance-or-die style, Proxy’s music infects its way into your brainwaves and forces you to react. Although at times sounding like an atomic bomb threat, the chaotic buildups and sudden outbursts of energy contain an alluring euphoria that is hard to resist. Grab your copy of Music From The East Block Jungles, Pt. 1 out now and Pt. 2, February 11th. Also, keep up to date with the latest Proxy news at Facebook.com/useproxy and www.dimmak.com.

suzsanna Eva Ward is on the fast track to stardom. Better known as ZZ Ward, she is one of 2012’s gems. Her bluesy soulful voice sounds similar to that of Amy Winehouse and Adele with a hint of Alicia Keys. Her talents are adorned throughout her recently released album, Til the Casket Drops. Many songs revolve around love, and the ups and downs that define it. However, the sounds that set the scenery don’t drag you into an emotional lull, but do just the opposite. The hip hop-infused blues keeps your body and eardrums poised and ready for more. Lost in the beautiful beats, it’s easy to overlook some of the dark, lustful lyrics Ward has written. Songs, such as “Put the Gun Down” cry out for a preying woman to leave her man alone. While others like “Criminal,” featuring Freddie Gibbs, pull listeners head on into the hip hop world while taking us through the emotional theft sometimes felt at the end of a relationship. “Cryin Wolf” featuring Kendrick Lamar has sewn in heavy guitar and drums, bringing the blues to the front door of hip hop. The mixture of the genres on this LP is enticing. The old school, soul-filled track “Charlie Ain’t Home” is a warm blanket of blues to wrap up in. “Little Darlin,” featuring the O’mys is breath taking blues, telling the story of unattainable desires. It’s one of those tracks you repeat a few times, similar to what you’ll be doing with the entire album. Ward’s world of hip hop-infused blues is a great one to get lost in.

Keep up with ZZ Ward at www.zzward.com. 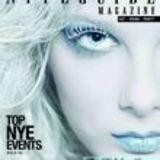 NiteGuide Magazine's top picks for the next up and coming artists

NiteGuide Magazine's top picks for the next up and coming artists