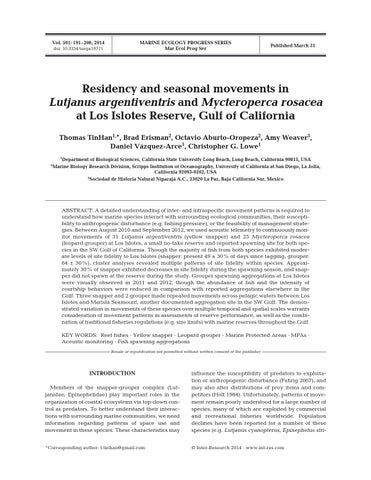 ABSTRACT: A detailed understanding of inter- and intraspecific movement patterns is required to understand how marine species interact with surrounding ecological communities, their susceptibility to anthropogenic disturbance (e.g. fishing pressure), or the feasibility of management strategies. Between August 2010 and September 2012, we used acoustic telemetry to continuously monitor movements of 31 Lutjanus argentiventris (yellow snapper) and 25 Mycteroperca rosacea (leopard grouper) at Los Islotes, a small no-take reserve and reported spawning site for both species in the SW Gulf of California. Though the majority of fish from both species exhibited moderate levels of site fidelity to Los Islotes (snapper: present 49 ± 30% of days since tagging, grouper: 64 ± 30%), cluster analyses revealed multiple patterns of site fidelity within species. Approximately 30% of snapper exhibited decreases in site fidelity during the spawning season, and snapper did not spawn at the reserve during the study. Grouper spawning aggregations at Los Islotes were visually observed in 2011 and 2012, though the abundance of fish and the intensity of courtship behaviors were reduced in comparison with reported aggregations elsewhere in the Gulf. Three snapper and 2 grouper made repeated movements across pelagic waters between Los Islotes and Marisla Seamount, another documented aggregation site in the SW Gulf. The demonstrated variation in movements of these species over multiple temporal and spatial scales warrants consideration of movement patterns in assessments of reserve performance, as well as the combination of traditional fisheries regulations (e.g. size limits) with marine reserves throughout the Gulf. KEY WORDS: Reef fishes · Yellow snapper · Leopard grouper · Marine Protected Areas · MPAs · Acoustic monitoring · Fish spawning aggregations Resale or republication not permitted without written consent of the publisher

INTRODUCTION Members of the snapper-grouper complex (Lutjanidae; Epinephelidae) play important roles in the organization of coastal ecosystems via top-down control as predators. To better understand their interactions with surrounding marine communities, we need information regarding patterns of space use and movement in these species. These characteristics may

influence the susceptibility of predators to exploitation or anthropogenic disturbance (Fahrig 2007), and may also alter distributions of prey items and competitors (Holt 1984). Unfortunately, patterns of movement remain poorly understood for a large number of species, many of which are exploited by commercial and recreational fisheries worldwide. Population declines have been reported for a number of these species (e.g. Lutjanus cyanopterus, Epinephelus stri- 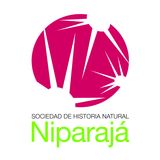