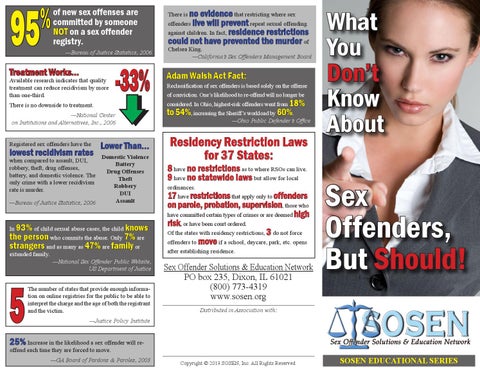 of new sex offenses are committed by someone NOT on a sex offender registry. —Bureau of Justice Statistics, 2006

Available research indicates that quality treatment can reduce recidivism by more than one-third.

There is no downside to treatment. —National Center on Institutions and Alternatives, Inc., 2006 Registered sex offenders have the

93% of child sexual abuse cases, the child knows the person who commits the abuse. Only 7% are strangers and as many as 47% are family or In

The number of states that provide enough information on online registries for the public to be able to interpret the charge and the age of both the registrant and the victim.

no evidence that restricting where sex live will prevent repeat sexual offending residence restrictions could not have prevented the murder of There is offenders against children. In fact,

Adam Walsh Act Fact: Reclassification of sex offenders is based solely on the offense of conviction. One’s likelihood to re-offend will no longer be considered. In Ohio, highest-risk offenders went from , increasing the Sheriff’s workload by . —Ohio Public Defender’s Office

8 have no restrictions as to where RSOs can live. 9 have no statewide laws but allow for local ordinances. have

17 restrictions that apply only to offenders on parole, probation, supervision, those who have committed certain types of crimes or are deemed high risk, or have been court ordered. Of the states with residency restrictions, 3 do not force offenders to move if a school, daycare, park, etc. opens after establishing residence.

What You Don’t Know About

Sex Offenders, But Should!

Distributed in Association with:

25% Increase in the likelihood a sex offender will reoffend each time they are forced to move. A downloadable brochure with FACTS about registered citizens. Please distribute freely. Thanks to SOSEN for providing this information.

A downloadable brochure with FACTS about registered citizens. Please distribute freely. Thanks to SOSEN for providing this information.