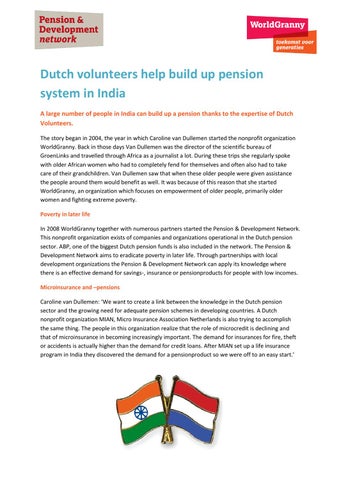 Dutch volunteers help build up pension system in India A large number of people in India can build up a pension thanks to the expertise of Dutch Volunteers. The story began in 2004, the year in which Caroline van Dullemen started the nonprofit organization WorldGranny. Back in those days Van Dullemen was the director of the scientific bureau of GroenLinks and travelled through Africa as a journalist a lot. During these trips she regularly spoke with older African women who had to completely fend for themselves and often also had to take care of their grandchildren. Van Dullemen saw that when these older people were given assistance the people around them would benefit as well. It was because of this reason that she started WorldGranny, an organization which focuses on empowerment of older people, primarily older women and fighting extreme poverty. Poverty in later life In 2008 WorldGranny together with numerous partners started the Pension & Development Network. This nonprofit organization exists of companies and organizations operational in the Dutch pension sector. ABP, one of the biggest Dutch pension funds is also included in the network. The Pension & Development Network aims to eradicate poverty in later life. Through partnerships with local development organizations the Pension & Development Network can apply its knowledge where there is an effective demand for savings-, insurance or pensionproducts for people with low incomes. Microinsurance and â&#x20AC;&#x201C;pensions Caroline van Dullemen: â&#x20AC;&#x2DC;We want to create a link between the knowledge in the Dutch pension sector and the growing need for adequate pension schemes in developing countries. A Dutch nonprofit organization MIAN, Micro Insurance Association Netherlands is also trying to accomplish the same thing. The people in this organization realize that the role of microcredit is declining and that of microinsurance in becoming increasingly important. The demand for insurances for fire, theft or accidents is actually higher than the demand for credit loans. After MIAN set up a life insurance program in India they discovered the demand for a pensionproduct so we were off to an easy start.â&#x20AC;&#x2122;

DHAN Foundation MIAN works together with the DHAN Foundation in India, DHAN stands for Development of Humane Action. This organization aims to decrease people’s physical and mental vulnerability so they in turn can improve their own living situation. The DHAN Foundation currently reaches more than a million poor families spread over thousands of villages and slums. In two of their biggest projects, micropensions for poor women and water and agricultural projects DHAN works with self-help groups of fifteen to twenty people called “kalanjiams”. They are organized in clusters and these clusters in federations which can consist out of more than 3,000 people. The DHAN Foundations organizes these federations’ micropenions, drinking water, health care, education, housing, marketing of their products etc. The organization has a longstanding relationship with multiple Dutch financial institutions. Caroline van Dullemen; ‘The CEO of the DHAN Foundation, Vasimalai, talked with MIAN about his ageing clientele and he wanted to look into the possibilities of a pensionproduct. The Pension & Development Network then set up a technical team to look into developing such a project.’ Professional organization The technical team consisted of Jos van Ophem, Jan Nijssen en Anna Timmermans. All three work for financial institution part of the Pension & Development Network. When asked about their experiences during their trip to India they speak highly about the professional infrastructure and methods created to make microcredit and –pensions possible. They were able to use these to their advantage while creating the micropension scheme. Their first stop was Tamil Nadu, a land in southeastern India ‘It was all about networking’ says Jan Nijssen, ‘and to make clear with what intentions we were there. We weren’t there to tell them what we drafted up for them but came to find a common ground between our expertise and their needs and demands.’

Misunderstandings and problems Because pensions are a complex subject some misunderstandings needed to be cleared up first. Jos van Ophem: ‘Most people wanted a retiring age of 60 years in addition to a system where people who are 60 now would get a full pension. We needed to explain people that we would need an unbelievable amount of money in order to realize that and that pensions are about endurance.’ There had been extensive research amongst the self-hel p groups on how much premium people were able to spare. ‘Which isn’t much’ says Van Ophem. ‘And then there is the discussion that you can only get a high pension if your premium is high so you can make a nice yield. Now the yield over there is quite high but that is due to the high inflation. If you link the pension to the height of the yield then the pension won’t be worth much in the end.’ There were also practical problems. Jos van Ophem: ‘In the Netherlands it is easy to find people who have paid their premiums through the civil registry once they are eligible for receiving their pension, but we can’t do that in India. In addition to this I wanted to make an estimation about the life expectancy but they also didn’t have relevant data for our target market in India. Due to these reasons we were more careful with the pension prospects because we didn’t want to lose people’s trust, which is something you can only lose once.’

‘Even more importantly’ says Van Ophem, ‘is the pension the state provides. Practise shows that governmental officials judge whether or you are eligible to receive a state pension, “speed money” needs to be paid in order to speed up the process. If you don’t do this it could take years before you receive the pension that is rightfully yours. We didn’t know if we needed to take this into account when we were creating our pension scheme.’ Jan Nijssen: ‘It’s because of this reason that the DHAN Foundation finds it equally important to help people get their state pension and to help them save up

for a pension of their own. Even though it is only a couple hundred rupees it is a nice start. That’s why this had been added to our program. To help people get the state pension that is rightfully their without them having to take additional steps towards government officials.’ Help each other Next to all of this the technical team had a lot of respect the way the cash flows were administered and accounted for . Also the organization of the self-help groups, the “kalanjiams”, made a big impression. ‘In the groups there is always one natural leader’ says Anna TImmermans. ‘She has a lot of contact with the DHAN regional office. The groups are trust networks in which the women know if the other have or don’t have money. The social control is huge. The women all know that they can only move forward with regards to housing, healthc are, education and all basic human needs when they combine their strengths and help one another. That is why these self-help groups are not primarily focused on financial solidarity but more on the solidarity in helping each other.’ The kalanjiams were also very important in the communication. ‘It are difficult communication paths.’says TImmermans, ‘If you talk about expected yield in rural areas than that topic won’t be dealt with within an hour. There are plays, picture books and people of the DHAN foundation giving lectures in order to teach people the basic information they need and you try to create trust while doing all this.’ Ten pilot regions The preparations of the technical team as led to the project to be able to start in ten pilot regions in 2011. If these pilots show positive results the project will be implemented in other regions where the DHAN Foundation is active after 2016 as well. The target is to have half a million people join the program by 2020. The project will be supported from the Netherlands with 740,000 euro (each quarter 37,000 euro). About half of this is funded from the ministry of foreign affairs and the other from private pension funds and insurers. This money is in part used for the continuation of the pension knowledge center but also the solidarity fund. The Interest will allow the pensions to pay pensions to who have high need for them but can’t pay the full premium. The pension scheme differs from a Dutch pension scheme on a number of points. Jos van Ophem: ‘We are used to receive money from our pension funds from when we reach 60 to until we die. If you die when you are 60 the remainder of the money will be divided among those still alive in the fund. This idea wasn’t very attractive in India so we came up with two alternatives. The first is to receive normal payment from your fund and your heir will receive the remainder. The second possibility is to receive a higher payment but to not pass anything on to family/ members. Threats This pioneering effort has been completed and the implementation depends on locale people who will carry on the project but Anna Timmermans, Jos van Ophem and Jan Nijssen have faith in them. There are success-factors but also threats. One of the threats is whether or not people will be able to keep paying their premium, even when times are hard.

Anna Timmermans especially sees problems with the communication. ‘It is the same as in the Netherlands. People wonder where their money is going and then there is the fact that in India a much bigger percentage of their available budget is being handed over. If the communication about that isn’t clear the project can still fail.’ There has been set up a public-private management foundation called the Stichting Duurzame (Micro)pensioenen Ontwikkelingslanden, with representatives of the Ministry of Foreign Affairs and the umbrella organizations of pension funds and insurance companies, which closely follows the progress of the project. ‘Incredible India’ WorldGranny director Caroline van Dullemen also knows the dangers financial undertakings have. ‘You never know if there will be corruption so you must make sure the governance is good enough. Next to that there is the risk of inflation, which can make the money put together by the participants have insufficient value in the end. Nevertheless I think that the chance of success is high. Remember that these people always have taken care of their old age, through children, jewelry or cattle. What we want to achieve with micropensions is that the money that will replace these methods will boost the local economies. I think this will be the case in a country such as India. After all it is an incredibly intriguing economic miracle that is unfolding in “incredible India” Report from Dutch volunteers in India

A report from the Pension and Development Network and the experiences of their volunteers from a pension project in India.

Report from Dutch volunteers in India

A report from the Pension and Development Network and the experiences of their volunteers from a pension project in India.