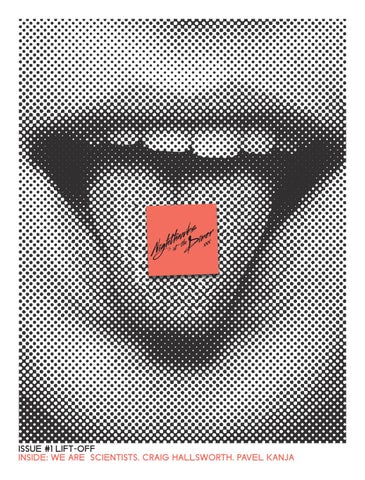 ISSUE #1 LIFT-OFF INSIDE: WE ARE SCIENTISTS. CRAIG HALLSWORTH. PAVEL KANJA

years after I first discussed the idea of publishing some kind of fanzine, here it is.

Welcome to the first issue of Nighthawks at the Diner, some kind of fanzine. I want Nighthawks at the Diner to fill the void left by David Chang and Peter Meehan’s seminal, groundbreaking, pioneering Lucky Peach. I want this thing we’re creating to be a platform for exciting talent - culinary, musical, anything. If you’re reading this you may have arrived here care of a Shazam code on food I’m serving at Freak Scene at Taste of London in Regent’s Park. No one’s done Shazamable food before so if that got you here, I hope it tasted good. There’s more where that came from. Thanks to We Are Scientists who have provided us with a small tour of a small kitchen, likely located in a big city. Check out their Spotify playlist, too. And catch them live by the way. You’ll be pleased you did. This first issue has been a crazy, throwntogether whirlwind. It’s going to be a ride. Thanks for coming along. Scott Hallsworth - London, June 2018.

NATD met with We Are Scientists’ UK label 100% Records at Freak Scene in London’s Soho to talk about food, music, and likely some other things not as important as food and music that we’ve since forgotten about. Even though We Are Scientists are currently on a world tour, they still need to eat. Here’s Chris Cain in his kitchen with some tips which may help in yours...

VIDEO MASTER: Scenes from One in, One out, the latest video by We Are Scientists. WATCH VIDEO NOW >>

1) Band was formed in 2000, in Berkeley, CA. At early shows members wore matching canvas jumpsuits — possible Marxist/Maoist messaging(?). 2) According to Source A, a family relation of one band member, prior to being signed to a publishing deal with Sony/ATV in 2005, one or both band members routinely “whined” about the unfairness of the music industry. Gripes included: “How is it possible that fucking OKGO are on MTV?”, “How the fuck are The Strokes a real band?”, and “What the fuck is supposed to be good about Interpol?” Presumption of parity with hierarchically ascendant bands suggests communist schematicism.

ere’s some more stuff about We Are Scientists that we’ve taken from their website because it’s faster than writing it all over again using different words.

father was a union organizer in Northern California/Sacramento area; MH likely Trotskyite Marxist. 6) Source A says that when he was 19, Chris Cain stole her television and sold it to pay for a “Nintendo game” which he had been disallowed by source to possess. (Subversion of authority, criminal sociopathy, video game addiction.) 7) Source F, a producer at The Late Show with David Letterman, says that after the band’s second of three appearances, a pair of “shitty underwear” was found in a garbage can in their dressing room.

IN THE KITCHEN: Not a place you’d normally associate with We Are Scientists but give it a watch!

10) Source B, a member of the band’s crew for several years, attests that members rarely if ever drink flat water, strongly preferring carbonated. Collectivist implications of deliberate ingestion and subsumption of large quantities of bubbles are clear. Whether expressed inadvertently 9) International festivals where the band has as pathology of indoctrinated ideas, or performed include Glastonbury, Coachella, deliberately as a clandestine rebuke of Reading & Leeds, Rock am Ring, Benicassim, capitalist anti-agency (per Marx), is less clear. Chasm (nudist), Beaches II: No Fear, Was Ist Himmel? (BDSM), Rounders (poker tournament based on the film), Gravid Aura (impregnation), and V Festival. 8) Internet-archived schedules for live events reveal visits — often extended — to over thirty countries, only fourteen NATO. “Touring” appearances may cover a pattern of seditious campaigning on behalf of various local insurgent interests.

Conclusion We Are Scientists’ anonymity from this agency has been overlong, and to potentially significant harm. Recommend concerted campaign to seed local and national media with adulatory praise of their every musical activity in order to reduce countercultural credibility & political influence. ————————END

Jonah, He Lived In A Micro-Apartment

Jonah, he lived in a micro-apartment And he came up with a theory About fish being addicted To alcohol But he had no way to prove it

what I was seeing

“Whatever happened to me?

It was some kind of message

Am I the only one

of love from a golden being

With a sense of mystery?

That appeared to me

All I ever seem to hear

And when I woke up

I was bruised and bleeding

All the foolishness in the world”

Sometimes you wonder about

He was passing a newsstand

Why don’t you fly away bird

And in the photo

Or haven’t you heard

Of some American rock band

You can defy irony?

He saw himself with a guitar

Stardust on your wing

And an eternal tinge to your eye

And all he could do

There’s someone in the crowd tonight

But getting to keep the handle

But suddenly the end is in sight

I stole a stethoscope

To try to locate the beat

In a bloodied scarf

I called an ambulance

Held to her right ear

Because I had cold feet

Imagine how the poets feel

She wants to know

Competing with a helpless squeal

Everybody’s investing Who could be happy lying Wiggling their toes in the sunlight? Hello is anybody home? I don’t know you go for a walk In a lonely field And you get a reputation Step inside the door’s wide open And your fate is sealed But there’s still time for one more Toxic affirmation ...

Listen Craig on Spotify >> NIGHTHAWK’S AT THE DINER - ISSUE 1

in some fantastic plight

When I was a meat eater, umami was a taste sensation that I typically associated with meat products. As I began to spend less time around meat, I realised that umami actually came from either a vegetable, grain or bacteria. Spending a huge amount of time experimenting with kimchi, I came up with different flavour components that were rich in umami yet were always vegan. Fermenting different types of wild, local vegetables like hogweed bulbs came up with umami sensations not dissimilar to those associated with smoked bacon.... yet with a whole lot less salt and sodium nitrate.

Condiment [kon-duh-muh nt] noun plural noun: condiments 1 a substance such as salt, mustard, or pickle that is used to add flavour to food. It’s a no brainer to me that umami is definitely a vegan product.

Veganism and umami have been around for centuries, since the spread of Zen Buddhism in the 1300s. Zen Buddhist monks were strict vegetarians whose search for umami led them to kombu which, in turn, became the base for konbu, the base for Shojin Dashi - the ultimate vegetarian soup stock. We only need to look at miso and soy as very common example of umami rich food that hasn’t been in contact with meat products. Meat relies of umami rich products to heighten its flavours, not the other way around. The majority of condiments are vegan.

pleasant to taste. Strain the contents and keep the leaves for a stir fry or eat them the way they are.

Sterilised jar with lid Wash and finely chop cauliflower leaves, place in the sterilised jar then add remaining ingredients. Store at room temperature for minimum 2 weeks. After 2 weeks you should have a very fragrant, pungent / stinky, sour liquid that is

Heat the ingredients to 60 degrees and keep the temperature constant for 1 hour. It’s ok if the temperature goes a little higher but be sure it doesn’t go lower as you won’t end up with such a flavourful stock. After 1 hour, strain the stock and then it’s good to go. Nighthawks at the Diner

I want Nighthawks at the Diner to fill the void left by David Chang and Peter Meehan’s seminal, groundbreaking, pioneering Lucky Peach. I wa...

Nighthawks at the Diner

I want Nighthawks at the Diner to fill the void left by David Chang and Peter Meehan’s seminal, groundbreaking, pioneering Lucky Peach. I wa...