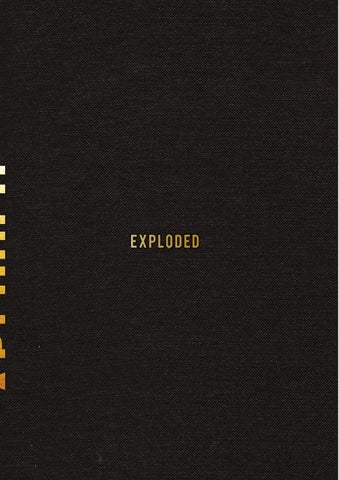 EXPLODED Works on paper from the Nigel Coates archive

In the post-punk years of the 1980s, Nigel Coates made an important breakthrough. When it comes to an expressionistic graphic style, he realised that architecture was virgin territory. He set about experimenting with a broad spectrum of materials, and discovered he could capture the dynamic quality of space in a new way. The impulsive approach to design could unlock the imagination. Some thirty years on, this modest exhibition assembles material that charts the evolution of Coatesâ&#x20AC;&#x2122; approach to drawing.

Whether intended to generate the built or the conceptual, these ‘explosions’ unpack each narrative so that it can be experienced ‘spatially’ as an assembly / disassembly, and allow the viewer to venture inside its architectural construct. In a volte-face of the conventions of plan and section, they relish the three-dimensional. Their swirling oil pastel, thick pencil outlines and thrusting arrows remind the viewer that despite architecture being the most solid of the arts, its experience can be light, fluid and of the moment. When these images first appeared, some interpreted them as dangerously iconoclastic. In all their charged, neo-Baroque delivery, they now appear to anticipate the field-like character of digital design that is so central to contemporary practice. With many works shown for the first time, this unique exhibition bridges the object and the idea, the built and the imaginary.

I need to engage in a to-and-from between the real and the imaginary. Whatever the subject or context, the act of drawing helps me explore - literally pulling ideas from my mind. Iâ&#x20AC;&#x2122;m never happier than when armed with a 2B pencil, lost in the pages of my sketchbook.â&#x20AC;?

before anything gets built, my drawings prize open a world of their own. These worlds oscillate between reality and the imaginary. Any project worth its salt contains equal proportions of rationality and impossibility.â&#x20AC;?

In London now, 2066AD and one millennium after William the Conqueror, there are no monuments as such but soft-monuments, parts of the city that work as urban icons with their activity, process and light. The City has become an agglomeration of shining steel towers of light jammed in among the nineteenthcentury Florentine palaces that used to be banks. After the disastrous efforts of architects in the last century, recent developments have pushed London forward as the capital of north-western Europe. Mediocre twentieth century buildings have been replaced by Neuromancer medievalism. No longer a museum, the city is both living history and living future. The building vocabulary has consolidated as an open framework, into which specific volumes like pods or cells can be inserted – artificial landscape structures, mushroom buildings attached to control cores, and missile-like spires which often appear to grow into one another. Streets are no longer just routes for traffic; they are public spaces that handle all speeds of movement from strolling to laser cycling at Mach1. Elevated guide ways lift travellers over historic sections of the city such as Oxford Street and Marylebone Road, which have virtually become parks thanks to the membranes that fill the gaps between buildings with their organic sensor mechanisms. Familiar now, these skins were not introduced until the Olympics held here eighteen years ago. Most major railway stations have become museums. The Tate Gallery has been transferred to Buckingham Palace which is now known as the Tate Buckingham, or TB. King Charles gave up the Palace as part of a handover of royal residences to the nation to celebrate the bimillenary. Along with a handful of architects taken up by the TB, Richard Rogers has become a national hero. Several of Roger’s schemes have been built since he died, including his slice-of-cake City Museum at St George’s Circus and his revitalised North Embankment, first presented over eighty years ago at a Royal Academy exhibition. It is hard to imagine that this vital terrace was once full of traffic belching out fumes. Now you can take networked minifoils to the fifty-two islands that form a plankton spread from Westminster to Canary Wharf. Soft and skeletal structures form a network of civic buildings. People travel outwards rather than inwards for their leisure. Mediocre development on the Circular roads concentrate nightclubs, bars and other ephemera in a doughnut of low-cost building encircling central London. Although London never had, and never wanted, the grand planning of Rome or Paris, the processional route from TB to St Paul’s has taken on a new meaning. Lined with bars and cafés, it is the city’s principle boulevard. At the Isle of Dogs’ junction with the Circular, a new gateway building has been based on the Henry Moore in Kensington Gardens. This provides a European focus to the two urban axes through London, the one generated by St Paul’s through the Strand to the Mall, and the Thames – London’s only truly large set piece. Commissioned by A Celebration 75 years of British Vogue.

draw the object in the mindâ&#x20AC;&#x2122;s eye, but draw its togetherness, inner workings and atmosphere. Rooms spin into the air, walls are prized apart. Everything appears to be in a state of formation, aggregating for both me and the viewer a myriad of clues into a single whole.â&#x20AC;?

Born in 1949, and trained at the Architectural Association, Nigel Coates is one of Britain’s most celebrated practitioners of architecture, interior and product design. He has led a parallel career in academia and artistically driven, internationally recognised work. His subversive spirit first came to public attention in 1984 with the publication of NATO (Narrative Architecture Today) magazine. A manifesto for a socio-culturally engaged and popular, narrative architecture, it advised readers to be the architects of their own lives, and in doing so, to radically adapt the buildings around them. Certain themes, in particular that of narrative, have continued in Coates’ designs and research ever since. Beyond issues of function or style, narrative, he asserts, is a language of design that builds on people’s everyday experience. Form must follow fiction. He has continued to explore the communicative and experiential potential of architecture as a language drawn from the commonplace. In his world, the city is best understood if explored as a living organism; popular experience and culture are central to the experience of architecture. His work plays on psycho-geographic association between the built environment and desire. Time and motion, he says, is the dynamic partner to the fixed, physical world. This approach is captured in depth in the Guide to Ecstacity (Laurence King, 2003). Throughout his colourful career, he has pursued experimental work that has been shown in art and design contexts, including such exhibits as ArkAlbion at the Architectural Association (1984), Ecstacity also at the AA (1992), Mixtacity at Tate Modern (2007), and Hypnerotosphere at the 11th Venice Architecture Biennale (2008). He is also a prolific designer of lighting and furniture, with links to Alessi, AVMazzega, Ceramica Bardelli, Fornasetti, Frag, Fratelli Boffi, Hitch Mylius, Poltronova, Terzani, Varaschin and Slamp, where he is also art director. For limited editions, he is represented by Priveekollektie Gallery, Holland. Examples of his work are held in collections around the world including the Victoria & Albert Museum and FRAC in Orleans, France. Having led the Department of Architecture at the Royal College of Art from 1995-2011, he is now RCA Professor Emeritus, and in 2012 received the Annie Spink Award for excellence in architectural education. His book Narrative Architecture (Wiley) was published in 2012. Shows in same year included Casa Reale at the Fuorisalone and the London Design Festival, and Picaresque at Kama: Sex and Design at the Triennale Design Museum in Milan.