Jazz in the Islands - Issue #3 (Digital) 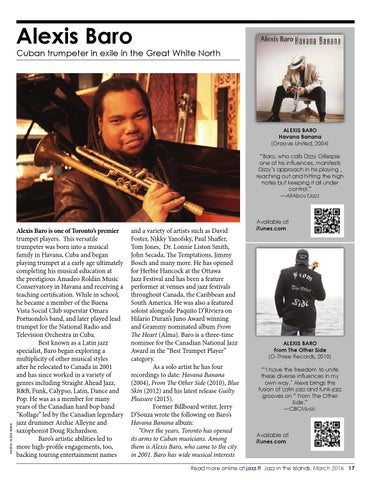 Cuban trumpeter in exile in the Great White North

“Baro, who calls Dizzy Gillespie one of his influences, manifests Dizzy’s approach in his playing , reaching out and hitting the high notes but keeping it all under control.” —AllAboutJazz

Alexis Baro is one of Toronto’s premier trumpet players. This versatile trumpeter was born into a musical family in Havana, Cuba and began playing trumpet at a early age ultimately completing his musical education at the prestigious Amadeo Roldán Music Conservatory in Havana and receiving a teaching certification. While in school, he became a member of the Buena Vista Social Club superstar Omara Portuondo’s band, and later played lead trumpet for the National Radio and Television Orchestra in Cuba. Best known as a Latin jazz specialist, Baro began exploring a multiplicity of other musical styles after he relocated to Canada in 2001 and has since worked in a variety of genres including Straight Ahead Jazz, R&amp;B, Funk, Calypso, Latin, Dance and Pop. He was as a member for many years of the Canadian hard bop band “Kollage” led by the Canadian legendary jazz drummer Archie Alleyne and saxophonist Doug Richardson. Baro’s artistic abilities led to more high-profile engagements, too, backing touring entertainment names

and a variety of artists such as David Foster, Nikky Yanofsky, Paul Shaffer, Tom Jones, Dr. Lonnie Liston Smith, John Secada, The Temptations, Jimmy Bosch and many more. He has opened for Herbie Hancock at the Ottawa Jazz Festival and has been a feature performer at venues and jazz festivals throughout Canada, the Caribbean and South America. He was also a featured soloist alongside Paquito D’Riviera on Hilario Duran’s Juno Award winning and Grammy nominated album From The Heart (Alma). Baro is a three-time nominee for the Canadian National Jazz Award in the “Best Trumpet Player” category. As a solo artist he has four recordings to date: Havana Banana (2004), From The Other Side (2010), Blue Skin (2012) and his latest release Guilty Pleasure (2015). Former Billboard writer, Jerry D’Souza wrote the following on Baro’s Havana Banana album: “Over the years, Toronto has opened its arms to Cuban musicians. Among them is Alexis Baro, who came to the city in 2001. Baro has wide musical interests

Jazz in the Islands - Issue #3 (Digital)

Cuban trumpeter Alexis Baro reveals his Guilty Pleasure on disc. And more stories that chronicle jazz in the Caribbean and Caribbean Jazz. 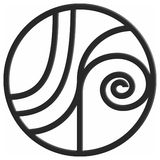 Articles from Jazz in the Islands - Issue #3 (Digital)

Michael Boothman was on the path to global success as he spent a couple weeks at RCA Studio in New York recording his classic album, "Heaven" for Tabu Records, a subsidiary of RCA Records, and importantly helmed by records business legend Clarence Avant. To hear the story, Boothman spoke to Jazz In The Islands about the making of the record.