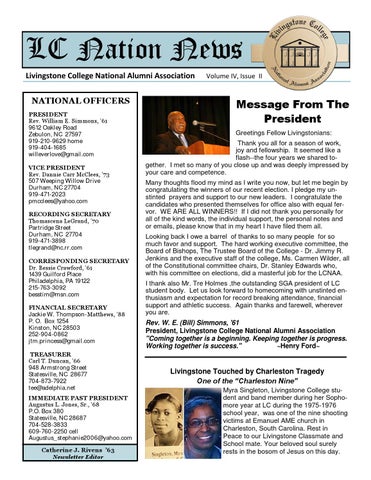 Message From The President Greetings Fellow Livingstonians: Thank you all for a season of work, joy and fellowship. It seemed like a flash--the four years we shared together. I met so many of you close up and was deeply impressed by your care and competence. Many thoughts flood my mind as I write you now, but let me begin by congratulating the winners of our recent election. I pledge my unstinted prayers and support to our new leaders. I congratulate the candidates who presented themselves for office also with equal fervor. WE ARE ALL WINNERS!! If I did not thank you personally for all of the kind words, the individual support, the personal notes and or emails, please know that in my heart I have filed them all. Looking back I owe a barrel of thanks to so many people for so much favor and support. The hard working executive committee, the Board of Bishops, The Trustee Board of the College - Dr. Jimmy R. Jenkins and the executive staff of the college, Ms. Carmen Wilder, all of the Constitutional committee chairs, Dr. Stanley Edwards who, with his committee on elections, did a masterful job for the LCNAA. I thank also Mr. Tre Holmes ,the outstanding SGA president of LC student body. Let us look forward to homecoming with unstinted enthusiasm and expectation for record breaking attendance, financial support and athletic success. Again thanks and farewell, wherever you are. Rev. W. E. (Bill) Simmons, &#39;61 President, Livingstone College National Alumni Association &quot;Coming together is a beginning. Keeping together is progress. Working together is success.&quot; ~Henry Ford~

Livingstone Touched by Charleston Tragedy One of the “Charleston Nine” Myra Singleton, Livingstone College student and band member during her Sophomore year at LC during the 1975-1976 school year, was one of the nine shooting victims at Emanuel AME church in Charleston, South Carolina. Rest in Peace to our Livingstone Classmate and School mate. Your beloved soul surely rests in the bosom of Jesus on this day.

From the Desk of the Public Relations Chair/ Newsletter Editor Dear fellow Livingstonians: I must express my appreciation to the chapter presidents, and chapter contact persons who sent me articles for the LCNAA Newsletters during the past four years. It has truly been an honor to have served as the Public Relations Chair for our national organization. I trust that you have received each newsletter that was sent to you through the United States postal service, as well as those sent by way of email and those placed on the LCNAA website. Further, I hope you enjoyed reading the articles, seeing pictures of those you may not have seen for a while, and that you felt more connected to fellow Livingstonians and your alma mater. I sent emails, with details, each time I was made aware that we had lost a fellow Livingstonian. During each Annual Spring Convention, Rev. Dannie McClees and I conducted the Necrology Ceremony at which time we called the names of known deceased Livingstonians. I was honored to be asked to prepare and present “A Resolution Dedicated to the Loving Memory of a Great Livingstonian” for numerous deceased Livingstonians, and to have given copies to family members. I also shared copies with the outgoing president, Rev. William Simmons, and the incoming president, Mrs. Delores Johnson. I must give Kudos to Mrs. Felicia King, who actually designed the lay-out for the first newsletter, and to Mrs. Delores Pouncey who graciously agreed to assist me with editing. My gratitude to Ms. Jeanne Dennis, from Quick-Copy Printing, whose guidance has been invaluable, and her patience has been remarkable. I want to express my sincere appreciation to our president, Rev. William Simmons, for asking me to serve in this position and for his continuous encouragement. Congratulations to Mr. Nigel Alston, newly elected LCNAA Public Relations Committee Chair. Let me continue to encourage each chapter president to appoint a member who will be responsible for sharing chapter news with the PR Chair.

The Livingstone College men&#39;s golf team claimed the Golden Bulls Invitational on a high note, coming in first place on April 13, 2015 at the Larkhaven Golf Club. The Blue Bears, a team of Phillip Harrison, Telvin Walker, Stephen Washington, Lenorris Williams, and Harry Standberry under the direction of head coach Andre Springs shot an impressive combined score of 305, securing their first place finish. All players finished in the top ten, making their win that much sweeter. Phillip Harrison shot the team&#39;s best round of the day, with a total of 73, followed by teammates Telvin Walker who finished second with a total score of 76, and Stephen Washington who tied for third, with a score of 77. Lenorris Williams finished in fifth place, carding a total score of 79, while teammate Harry Standberry rounded out the team in sixth for the Blue Bears, with a score of 81. Written By: Tenai Staley

Dear LCNAA: I have immensely enjoyed serving as your Vice President these past two years. I would like to thank you and Rev. Simmons for the opportunity. Also, I greatly appreciate your support as I ran for President of LCNAA 2015-2019. Even though I lost the election, I love LCNAA and Livingstone College. I would like to congratulate Mrs. Johnson and all of the officers. I am willing to support you and to serve.

CHAPTER NEWS Washington Area Alumni Chapter Another Successful Program Year Beginning In April 2007 and continuing each successive year, Washington Area Chapter members have annually taken a collective Oath of Commitment to Livingstone College and its students. This oath reflects a commitment to leadership development, promoting academic excellence, and service to the school. This year, we honored that commitment by conducting mentoring and leadership development workshops and through scholarship fundraising with each chapter member agreeing to RAISE a minimum of $1,000 for the academic year. This year’s scholarship fundraising supported two scholarships: The John R. Kinard Scholarship for Leadership and Academic Excellence and the Grace E. Littlejohn Scholarship for Academic Excellence. For the 2014 - 2015 academic year, three $5,000 scholarships were awarded to Washington Area Livingstone College students for a total award of $15,000 in scholarship funds. The chapter is set to award $20,000 in scholarships for the next academic year, 2015 - 2016. Over the last eight years, the Washington Area Chapter has awarded over $168,000 in scholarship funds. Our fundraising takes place through two major events: The Annual Spring Gala and the Annual Golf Tournament. The Spring Gala, benefitting the Kinard Scholarship, was held on April 25, 2015, with over 250 people in attendance. At this event we recognized eight area high school students with 2015 John R. Kinard Youth Leadership Awards. We also honored Scholarship Fund Spring Gala Bishop Richard K. Thompson, Mid Atlantic II Episcopal District, with our 2015 Exemplary Servant Leader Award. This year’s second fundraising event, our 11th Annual Scholarship Fund Golf Tournament and Family Outing, will be held on July 27, 2015, at the Swan Point Yacht and Country Club, Issue, Md to benefit the Littlejohn Scholarship Our commitment to mentoring and leadership development was accomplished through personal mentoring sessions, a Mentoring and Leadership Development Workshop, and the Annual Graduates Picnic. The 2015 Mentoring and Leadership Development Workshop was held on March 10, 2015, during spring break. The main purpose of this session was to help students get motivated about life after college and explore ways they can start now to advance their careers. Students were encouraged to look at internships as additional experiences to enhance the resume. Dr. James Gray, a Washington Area Chapter member, explored “Skills Building for Life After College,” pointing out 11 critical skills and values most appealing to employers. After lunch, the students and alumni viewed “A Time for Justice,” a documentary film on the civil rights era. Dr. Gray then led a discussion of the civil rights era, the current status of civil rights issues and how this impacts the students’ need to prepare them to live in today’s culture. The Washington Area Chapter has enjoyed a very successful 2014 – 2015 program year. Barbara Poe, President

Livingstone College Alumni at the Black &amp; Blue Affair Jazz Brunch, 2/7 What a great time we had on Saturday, February 7th at our first &quot;A Black &amp; Blue Affair&quot; Jazz Brunch! More than 150 people attended, enjoying the food, fellowship and jazz provided by sax player Marcus Anderson. We had great community support, excellent involvement by chapter members and the food was great. Thanks to Dr. Herman Felton, Jr. for attending the event and providing remarks to the attendees. Also, thanks to Delores Johnson from the Greensboro Chapter and Warren Arrington from the Raleigh/Wake Chapter for attending. We appreciate the support.

Miss. Khadijah Barrett, a Livingstone sophomore, was our 2015 scholarship recipient. She was awarded $1500. Our president served as our delegate at the LCNAA Spring Convention. We successfully held our semi-annual scholarship fundraiser, “Men Who Cook.” We will end the year with a total of 54 members. We will hold our summer picnic on July 10, with

A few weeks ago, we provided food for the men and women&#39;s basketball team when they played WSSU here in W-S. It was a win-win as we also had a Pizza Hut fundraiser the same day. Each team member had an individual, large two-topping pizza along with complimentary cinnamon sticks provided by Pizza Hut. Coaches and staff were also provide their food selection. The chapter made a donation to the school recently to provide the funds for purchase of travel bags and book packs for the women&#39;s basketball team. They should have them by next weekend. And, they are deserving at 22-0! They are also ranked #5 nationally.

for the benefit of

The SRD Chapter continues to work towards reaching goals set for the 2014-2015 year.

In the fall: We kicked off our “Adopt a Student” Project by adopting two freshmen, giving us a total of five adopted students (2 sophomores, 1 junior).

This is the print newsletter from the Livingstone College National Alumni Association mailed to paid members of the association and provided online to all. Currently, the newsletter is published twice a year. 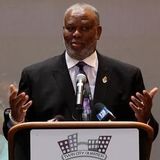