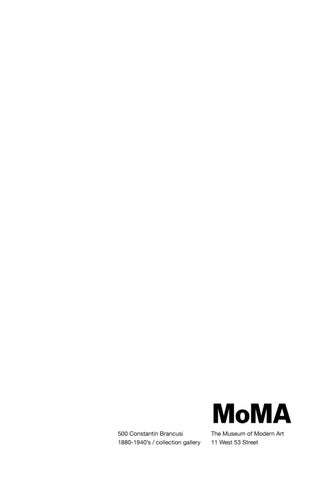 Installation view from The Museum of Modern Art

Installation view from The Museum of Modern Art

Using a vocabulary of simplified shapes that pushed towards abstraction, Brancusi created imaginative sculptures that evoke rather than resemble their subjects. He frequently made multiple versions of the same work, returning to the same subjectsâ&#x20AC;&#x201D; birds, newborn babies, female headsâ&#x20AC;&#x201D;again and again. His multi-part bases often combine several materials to achieve a variety of color and texture. As such, they, perform a dual function: they serve simultaneously as components of the artworks and as their supports.

This sculpture is the earliest extant Endless Column. In preceding years Brancusi had used a single or double pyramid as a base for his sculpture, but he eventually came to see this abstract construction as a fully realized work in its own right. Carved from oak, this succession of pyramids forms a rhythmic and undulating geometry that suggests the possibility of infinite expansion. Like other favorite motifs, this was one that Brancusi would return to over the course of his career. In the mid-1920s, he carved an Endless Column for his friend the photographer Edward Steichen that rose more than twenty-three feet. And in 1937 Brancusi erected a steel Endless Column in TĂŽrgu-Jiu, Romania, that soared more than ninety-eight feet into the air. That Endless Column, his last, was part of a larger sculptural ensemble that included The Gate of the Kiss and Table of Silence, which formed the artistâ&#x20AC;&#x2122;s only foray into public sculpture.

Brancusi often engaged with a particular motif time and again, producing multiple variants of a given subject, but Young Bird is an exception. Only two other Young Bird works exist, a 1925 marble on which Brancusi based this bronze and a larger marble made in 1929. Young Bird stands on an original pedestal designed by the artist for this sculpture, which comprises a limestone cube and an abstract cylindrically shaped wooden base, whose repetitive forms call to mind Brancusiâ&#x20AC;&#x2122;s Endless Column.

This sculpture is a portrait of Margit Pogany, a Hungarian artist who sat for Brancusi several times in 1910 and 1911 while she was in Paris studying painting. Shortly after her return to Hungary, Brancusi carved a marble Mlle Pogany from memory, then made a plaster mold of the work, from which he cast four additional versions, including this one, in bronze. In representing its subject through highly stylized and simplified forms, the work was a significant departure from conventional portraiture. Large almond-shaped eyes overwhelm the oval face, and a black patina represents the hair that covers the top of the head and extends over the elaborate chignon at the nape of the neck. As with other motifs, this was a subject Brancusi would return to and rework in the years to come.

Brancusi carved this work, including the cylindrical base, from a single piece of wild cherry wood. Its simplified form suggests the serrated outline of the comb that crowns a rooster’s head. While Brancusi would go on to create other, larger versions of The Cock and had ambitions to erect one at a monumental scale, he made only two versions in wood, and this is the only one that survives. The Cock held particular significance for Brancusi, who purportedly said time and again, “Le Coq c’est moi” (The Cock is me).

Constantin Brancusi, The Cock,Paris 1924, Image from The Museum of Modern Art

This sculpture is the last of the seven Fish Brancusi created, and the largest. It attests to the artistâ&#x20AC;&#x2122;s deep interest in movement; not only does its heavy body, made of flecked blue-gray marble, evoke aquatic motion, it rests on a pivot that once allowed the work to spin. Even when still, the work changes as one moves around it. Broad and horizontal, the marble transforms into an attenuated sliver from particular points of view.

Constantin Brancusi,Fish, Paris 1930, Image from The Museum of Modern Art

Maiastra is a towering sculpture, more than seven feet tall, with four distinct parts. The lower sections are made of limestone and comprise two rectilinear blocks separated by a roughly hewn carving that Brancusi exhibited in 1908 as an independent sculpture, titled Double Caryatid. Perched atop this tower, a marble bird—the magical Romanian fairy-tale creature for which the sculpture is named—is reduced to its defining characteristics: ovoid body, elongated neck, beak, and plume of tail feathers. Maiastra is Brancusi’s first work to feature a bird, a subject to which he would return throughout his career. As a composite of disparate elements, Maiastra is exemplary of the artist’s practice. Brancusi believed that the base was a crucial component of a sculpture, and in making many of his works he experimented with a variety of bases until arriving at a combination of elements he found satisfying, often documenting the work photographically along the way. In Maiastra the rounded, smoothly polished surface of the marble bird contrasts sharply with both the stark angularity of the limestone blocks and the coarsely textured schematic carving of Double Caryatid. For the artist, this juxtaposition of materials and methods embodied the perpetual dialogue between the spiritual dimension and everyday reality.

Constantin Brancusi, Maiastra,1910-1912, Image from The Museum of Modern Art

Constantin Brancusi, Image from The Museum of Modern

Rather than modeling clay like his peers, Brancusi carved his work directly from wood or stone, or cast it in bronze. Simultaneously, he rejected realism, preferring that his sculptures evoke rather than resemble the subjects named in their titles. Brancusi made bases for many of his sculptures, themselves complex constructions that became part of the work. He often moved works from base to base, or placed them directly on the floor of his studio, so that they lived in the world alongside ordinary objects, and among people. Born in rural Romania, Brancusi moved to Paris in 1904, where he established his studio and quickly immersed himself in avant-garde art circles. In his adopted city, he embraced an experimental modern spirit, including an interest in modern machines and popular culture. With his friend Man Ray, he made films that captured his life in the studio—working with his materials and muses, activating his artworks through movement and recombination, and revealing his sources of inspiration such as animals at play, light in nature, and dance. Yet until his death he proudly presented himself as an outsider—cultivating his image as a peasant, with a long beard, work shirt, and sandals. The contradiction also informs his art making, which was dependent on ancient techniques as much as contemporary technologies. This exhibition celebrates MoMA’s extraordinary holdings—11 sculptures by Brancusi will be shown together for the first time, alongside drawings, photographs, and films. A selection of never-before-seen archival materials shed light on his relationships with friends, sitters, and patrons, including this Museum. What emerges is a rich portrait of an artist whose risk-taking and inventive approach to form changed the course of the art that followed. Brancusi collected records with music of many kinds. The playlist below, created by curators Paulina Pobocha and Mia Matthias, features selections from his extensive collection. 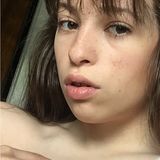 Create an exhibition poster and booklet for MOMA's Constantin Brancusi room, that accurately depicts the space and highlights the work.

Create an exhibition poster and booklet for MOMA's Constantin Brancusi room, that accurately depicts the space and highlights the work.