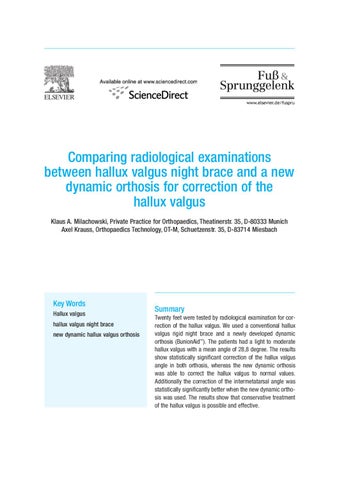 Introduction Hallux valgus has become the most common foot affection. Numerous studies, for example from SimFook and Hodgson (1958), demonstrate that the civilizatory development from walking barefoot to wearing modern shoes massively increased the incidence of hallux valgus. A familial disposition towards hallux valgus is established. Most patients are women in their 4th–6th decade (Kato und Watanabe 1981, Coughlin 1966, Coughlin und Thompson 1966). However, the patients are becoming increasingly younger. According to the textbooks, a conservative treatment of hallux valgus is not possible (compare Bischoff and Wirth 2001, Schuh et al. 2007). Contrary to that, new studies by Torkki et al. 2001 and 2003 demonstrate that a conservative treatment of hallux valgus by means of an orthosis is promising and otherwise necessary operations can be postponed. However, a permanent correction of the axis was not possible so far. Up to now conservative measures meant using a hallux valgus night splint for therapy and postoperative treatment. Well-known disadvantages of this rigid night splint are the local pressure load on the one hand, lack of wearing comfort and, on the other hand, the impossibility of even walking a few steps. Besides, the hallux valgus night splint does not correct the splayfoot, which is the actual cause of hallux valgus (Bischoff and Wirth 2001, Milachowski et al. 2007, Schuh et al. 2007, Wülker 1997). In cooperation with the Fraunhofer Institute a dynamic splint (BunionAid™) was developed for the active correction of light to moderate hallux valgus. The orthosis has six major functions: - metatarsal bandage, - supports the transversal arch with a pad - anatomic splint for the 1st metatarsal - soft part pad for pressure relief - free mobility of the base joint of the big toe - toe splint with corrective bandage.

The individually adjustable reins enable correction of the malpositioning. The splint is designed for day and night use and can also be worn in normal shoes. Initial clinical studies demonstrated a correction of the hallux valgus with this conservative therapy (Neumann 2005, Milachowski et al. 2007). Postoperative studies on the treatment of hallux valgus have also been performed with the newly developed orthosis (Milachowski 2007, Werzinger 2006). A comparative radiological study on the efficiency of the conservative correction of hallux valgus was performed with a conventional night splint and the newly developed orthosis (Fig. 1–3).

Patient records and methodology The studies were performed on 20 feet with light to moderate hallux valgus. A contracted severe deformity involving the other toes cannot be conservatively treated and therapy must either consist in orthopaedic shoes or an operation. All feet were x-rayed with the patients standing natively, with a night splint (Valco® FA Bort) and with the new dynamic orthosis (BunionAid™). The hallux valgus angle (α) and the intermetatarsal angle between the first and second ray (β) were determined (Haas 1981, Spinner et al. 1984). Statistic evaluation was by means of the T-test with a level of significance set at p &lt; 0.05. There were 15 patients, 2 men and 13 women. 5 patients (1 man and 4 women) had a hallux valgus on both sides. The average age of the patients was 49 years, the youngest patient was 23 years old and the oldest patient was 58 years old. All patients came to the office because of pain in the forefoot, there was no prior treatment, e. g. by means of inlays, shoe adjustments, physiotherapy or an operation.

Results The radiological studies of 20 feet with light to moderate hallux valgus demonstrate that the malpositioning can effectively be corrected by a night splint as well as the new dynamic orthosis (Tab. 1). The initial hallux valgus angle (α) was an average of 28.8° (minimum 20°, maximum 46°). The night splint allowed a – statistically significant – reduction to 18.4° with a low value of 10° and a high value of 30°. The newly developed BunionAid™ orthosis corrected the malpositioning to normal values with an average value of merely 11.6°, minimum 8° up to a maximum of 18°. The differences are statistically significant (p &lt; 0.05). Naturally, the splayfoot could not be corrected as well with the night splint as with the newly develo-

ped dynamic orthosis, which simultaneously serves as a metatarsal bandage. Thus the average intermetatarsal angle DI – DII (β) was an average of 16° within a range from a minimum of 12° to a maximum of 24°. The night splint enabled a mild correction to an average of 13° (min. 8°, max. 18°), the differences are not statistically significant (p &gt; 0.05). With the newly developed dynamic orthosis the intermetatarsal angle was also normalized at a value of 10.2° (min. 8°, max. 12°). The difference to the initial result is also significant in this case (p &lt; 0.05), this correspondingly applies to the night splint and hallux valgus for the correction of the intermetatarsal angle (Fig. 4–12).

Discussion So far, the conservative therapy to correct hallux valgus was considered not possible. One managed by using a rigid night splint, particularly after operations. Our initial radiological studies on light to moderate hallux valgus demonstrate for the first time that the hallux valgus angle can effectively be corrected with a rigid night splint as well as the newly developed orthosis whereas the new orthosis was able to correct to normal values. The differences are statistical-

Acknowledgements I would like to thank Dr. R. Neumann, Munich and Prof. Dr. E. V. d. Flierdt, Munich, for the support with the x-rays and my daughter cand. Ing. Charlotte Milachowski for helping me with the statistical evaluation. 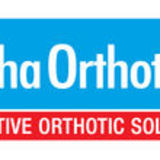