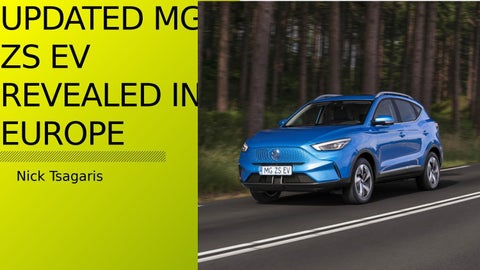 Overview A new and improved version of Australia’s cheapest electric vehicle has been revealed. Chinese brand MG launched the ZS EV in Australia late in 2020 priced at a very enticing $43,990 drive-away. This is almost $10,000 cheaper than the competition. Now the brand has revealed an updated version in Europe.

Intention Leading the charge is a new 72kWh battery version that boosts driving range to about 440km. This is a huge jump over the current version’s 44.5kWh battery that provides 263km of range. Prices in Europe suggest the vehicle would be closer to

The increased range puts the updated ZS EV in the same ballpark as the accomplished Hyundai Kona EV and the Kia Niro. Both these vehicles cost about $70,000 on the road.

• A cheaper version equipped with a 51kWh battery is also in the works. This variant will have a driving range of up to 318km.

MG has made several styling changes including new LED headlights and a revised rear bumper and wheel design. The company has removed the grille from the current version and replaced it with a continuous surface to bring its

A new smartphone connectivity feature has been added that allows users to control climate, security and charging functions via

Inspiration Other upgrades include a new instrument cluster and improved infotainment tech. The current MG ZE EV makes about 105kW of power and 353Nm. Instant torque is the key to an EV’s performance and the MG has peppy acceleration off the mark. MG hasn’t revealed if the updated version gets a boost in performance.

Your Work Decide which order you want to present your work in. For example, you may wish to organize your work by project type. In such a case, you could divide the works by landscape, portrait, nature, fine-art, and any other projects you&#39;ve completed. You may also choose to present your work chronologically. Whichever order you choose, ensure that your presentation has some sort of flow to it.

A new and improved version of Australia’s cheapest electric vehicle has been revealed. Chinese brand MG launched the ZS EV in Australia late in 2020 priced at a very enticing $43,990 drive-away. This is almost $10,000 cheaper than the competition Nick Tsagaris