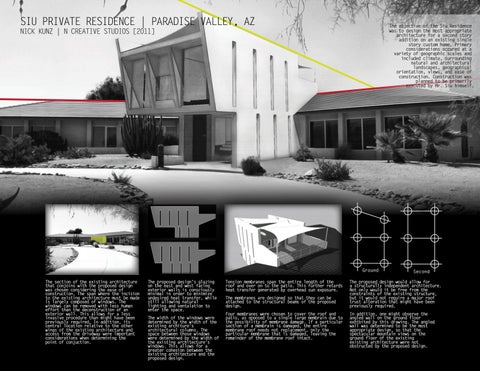 The objective of the Siu Residence was to design the most appropriate architecture for a second story addition on an existing single story custom home. Primary considerations occured at a variety of geographic scales and included climate, surrounding natural and architectural landscapes, geographical orientation, views, and ease of construction. Construction was planned to be primarily executed by Mr. Siu himself.

Tension membranes span the entire length of the roof and over on to the patio. This further retards heat transfer generated by overhead sun exposure. The membranes are designed so that they can be attached to the structural beams of the proposed design. Four membranes were chosen to cover the roof and patio, as opoosed to a single large membrain due to the possibility of membrane damage. If a particular section of a membrain is damaged, the entire membrane roof needs not replacement, only the particular membrane that is damaged, leaving the remainder of the membrane roof intact.

The proposed design would allow for a structurally independent architecture. Not only would it be free from the constraints of the existing structure, but it would not require a major roof trust alteration that might have been previously required. In addition, one might observe the angled wall on the ground floor exhibited by this drawing. The angled wall was determined to be the most appropriate design, so that the spectacular mountain views on the ground floor of the existing existing architecture were not obstructed by the proposed design.

25’ The existing architecture is characterized by three primary wings. The architectural wings point in the general directions of east, west, and south. When examining the site at the city scale, the east and west wings point toward the surrounding mountain ranges, with the south wing being anomalous in this regard. The proposed design completes the common characteristics that the east and west wings share.

The site is of particular importance because it terminates the neighborhood street. An architecture is needed that is ambitious enough to address both the conclusion to the street and the introduction to the site. In the same breath, an architecture is needed that is modest enough to appropriately align with the existing architecture. The proposed design is unthreatening to the surrounding architectural landscape. When examining the surrounding sites, one might observe that a similar architectural introduction has already been applied to several other sites within the neighborhood.

The proposed design&#39;s rectilinear footprint is orientated on the site so that it is in concordance with the existing architectural wings. More importantly, it is designed so that the shortest span of exterior walls are exposed to the south, which is the most susceptible to heat transfer, and to the north, where the proposed design conjoins with the existing architecture.

This design proposal was completed at n Creative Studios for a private home augmentation in Paradise Valley, AZ in 2011. 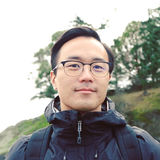