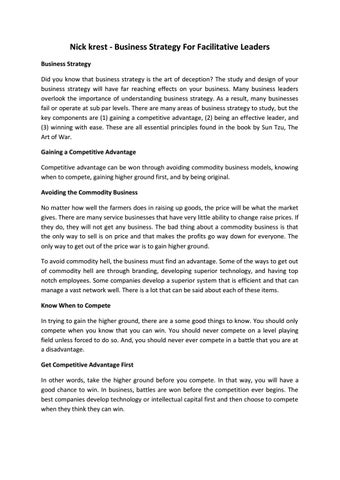 Nick krest - Business Strategy For Facilitative Leaders Business Strategy Did you know that business strategy is the art of deception? The study and design of your business strategy will have far reaching effects on your business. Many business leaders overlook the importance of understanding business strategy. As a result, many businesses fail or operate at sub par levels. There are many areas of business strategy to study, but the key components are (1) gaining a competitive advantage, (2) being an effective leader, and (3) winning with ease. These are all essential principles found in the book by Sun Tzu, The Art of War. Gaining a Competitive Advantage Competitive advantage can be won through avoiding commodity business models, knowing when to compete, gaining higher ground first, and by being original. Avoiding the Commodity Business No matter how well the farmers does in raising up goods, the price will be what the market gives. There are many service businesses that have very little ability to change raise prices. If they do, they will not get any business. The bad thing about a commodity business is that the only way to sell is on price and that makes the profits go way down for everyone. The only way to get out of the price war is to gain higher ground. To avoid commodity hell, the business must find an advantage. Some of the ways to get out of commodity hell are through branding, developing superior technology, and having top notch employees. Some companies develop a superior system that is efficient and that can manage a vast network well. There is a lot that can be said about each of these items. Know When to Compete In trying to gain the higher ground, there are a some good things to know. You should only compete when you know that you can win. You should never compete on a level playing field unless forced to do so. And, you should never ever compete in a battle that you are at a disadvantage. Get Competitive Advantage First In other words, take the higher ground before you compete. In that way, you will have a good chance to win. In business, battles are won before the competition ever begins. The best companies develop technology or intellectual capital first and then choose to compete when they think they can win.

Be Original It is unlikely that any firm can gain the competitive advantage by trying to copy another. The reason is that the competitor will always be one step ahead of you and a smart competitor will even mislead you purposefully. Any business that wants a real market advantage will most likely need to develop their own ideas, keep them secret, and follow through. Being an Effective Leader A great leader must be strict, reward bravery, and avoid personal character downfalls. Strictness as a Leader Discipline must be swiftly carried out against the disobedient. There must be an effective system of rewards and punishments in place. The effective leader will be able to persuade others to the importance of the mission and commit them to work hard for the goal. Any leader that can&#39;t manage their people must be removed. Leader Character Downfalls Some of the traits that can cause a leader harm are cowardice, recklessness, worry, hasty temper, and honor sensitivities. According to Sun Tzu, these are the five sins of a leader that lead you to get captured, bring destruction, trouble, shame, and poor decisions. Rewarding Bravery A great leader should reward people that are brave. People that step up and get things done that are risky or not popular should be rewarded for their efforts. The act of rewarding bravery has a great deal with keeping a company in competitive advantage. When employees are willing to take risks and give it their all, the intellectual contributions will give the company great advantage. Winning With Ease One of the greatest things that Sun Tzu said was, &quot;What the ancients called a clever fighter is one who not only wins, but excels in winning with ease&quot;. The greatest leaders know when to fight and when not to fight. They know how to compete in areas that are not well defended. They know how to use their people to win. When leaders win with ease, they are rarely given credit because it looks so easy. What many people don&#39;t realize is that the battle was won before the fight began due to careful planning and strategy. Final Thoughts Business strategy is complicated. The businesses that do the best often the best at deceiving their opponents, balking their competitors plans, or, even better, have the best employees and constantly break new and higher ground before anyone else gets there.

Competitive advantage can be won through avoiding commodity business models, knowing when to compete, gaining higher ground first, and by being original.