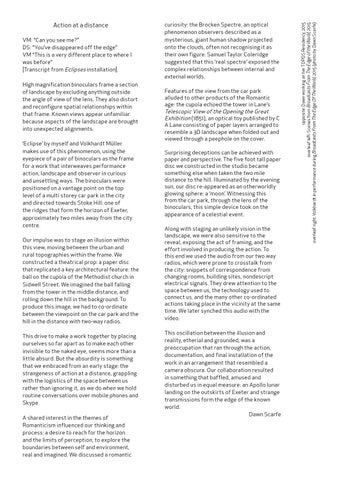 VM: “Can you see me?” DS: “You’ve disappeared off the edge” VM “This is a very different place to where I was before” [Transcript from Eclipses installation]. High magnification binoculars frame a section of landscape by excluding anything outside the angle of view of the lens. They also distort and reconfigure spatial relationships within that frame. Known views appear unfamiliar because aspects of the landscape are brought into unexpected alignments. ‘Eclipse’ by myself and Volkhardt Müller makes use of this phenomenon, using the eyepiece of a pair of binoculars as the frame for a work that interweaves performance action, landscape and observer in curious and unsettling ways. The binoculars were positioned on a vantage point on the top level of a multi storey car park in the city and directed towards Stoke Hill: one of the ridges that form the horizon of Exeter, approximately two miles away from the city centre. Our impulse was to stage an illusion within this view, moving between the urban and rural topographies within the frame. We constructed a theatrical prop: a paper disc that replicated a key architectural feature: the ball on the cupola of the Methodist church in Sidwell Street. We imagined the ball falling from the tower in the middle distance, and rolling down the hill in the background. To produce this image, we had to co-ordinate between the viewpoint on the car park and the hill in the distance with two-way radios. This drive to make a work together by placing ourselves so far apart as to make each other invisible to the naked eye, seems more than a little absurd. But the absurdity is something that we embraced from an early stage: the strangeness of action at a distance, grappling with the logistics of the space between us rather than ignoring it, as we do when we hold routine conversations over mobile phones and Skype. A shared interest in the themes of Romanticism influenced our thinking and process: a desire to reach for the horizon and the limits of perception, to explore the boundaries between self and environment, real and imagined. We discussed a romantic

curiosity: the Brocken Spectre, an optical phenomenon observers described as a mysterious, giant human shadow projected onto the clouds, often not recognising it as their own figure. Samuel Taylor Coleridge suggested that this ‘real spectre’ exposed the complex relationships between internal and external worlds. Features of the view from the car park alluded to other products of the Romantic age: the cupola echoed the tower in Lane’s Telescopic View of the Opening the Great Exhibition (1851), an optical toy published by C A Lane consisting of paper layers arranged to resemble a 3D landscape when folded out and viewed through a peephole on the cover. Surprising deceptions can be achieved with paper and perspective. The five foot tall paper disc we constructed in the studio became something else when taken the two mile distance to the hill. Illuminated by the evening sun, our disc re-appeared as an otherworldly glowing sphere: a ‘moon’. Witnessing this from the car park, through the lens of the binoculars, this simple device took on the appearance of a celestial event. Along with staging an unlikely vision in the landscape, we were also sensitive to the reveal, exposing the act of framing, and the effort involved in producing the action. To this end we used the audio from our two way radios, which were prone to crosstalk from the city: snippets of correspondence from changing rooms, building sites, nondescript electrical signals. They drew attention to the space between us, the technology used to connect us, and the many other co-ordinated actions taking place in the vicinity at the same time. We later synched this audio with the video. This oscillation between the illusion and reality, etherial and grounded, was a preoccupation that ran through the action, documentation, and final installation of the work in an arrangement that resembled a camera obscura. Our collaboration resulted in something that baffled, amused and disturbed us in equal measure: an Apollo lunar landing on the outskirts of Exeter and strange transmissions form the edge of the known world. Dawn Scarfe

Action at a distance 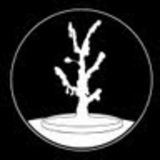 A publication documenting activity and discusssions undertaken in the TOPOS Space in Exeter including work in progress from Volkhardt Müller...

A publication documenting activity and discusssions undertaken in the TOPOS Space in Exeter including work in progress from Volkhardt Müller...