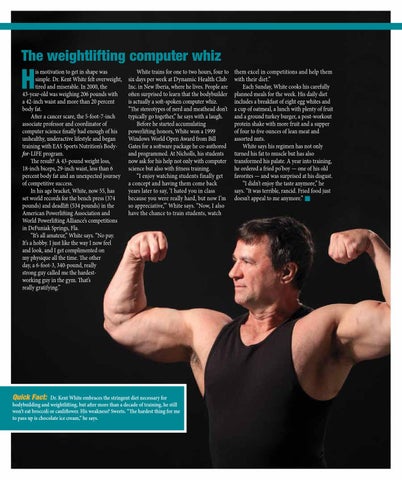 is motivation to get in shape was simple. Dr. Kent White felt overweight, tired and miserable. In 2000, the 43-year-old was weighing 206 pounds with a 42-inch waist and more than 20 percent body fat. After a cancer scare, the 5-foot-7-inch associate professor and coordinator of computer science finally had enough of his unhealthy, underactive lifestyle and began training with EAS Sports Nutrition’s Bodyfor-LIFE program. The result? A 43-pound weight loss, 18-inch biceps, 29-inch waist, less than 6 percent body fat and an unexpected journey of competitive success. In his age bracket, White, now 55, has set world records for the bench press (374 pounds) and deadlift (534 pounds) in the American Powerlifting Association and World Powerlifting Alliance’s competitions in DeFuniak Springs, Fla. “It’s all amateur,” White says. “No pay. It’s a hobby. I just like the way I now feel and look, and I get complimented on my physique all the time. The other day, a 6-foot-3, 340-pound, really strong guy called me the hardestworking guy in the gym. That’s really gratifying.”

White trains for one to two hours, four to six days per week at Dynamic Health Club Inc. in New Iberia, where he lives. People are often surprised to learn that the bodybuilder is actually a soft-spoken computer whiz. “The stereotypes of nerd and meathead don’t typically go together,” he says with a laugh. Before he started accumulating powerlifting honors, White won a 1999 Windows World Open Award from Bill Gates for a software package he co-authored and programmed. At Nicholls, his students now ask for his help not only with computer science but also with fitness training. “I enjoy watching students finally get a concept and having them come back years later to say, ‘I hated you in class because you were really hard, but now I’m so appreciative,’” White says. “Now, I also have the chance to train students, watch

them excel in competitions and help them with their diet.” Each Sunday, White cooks his carefully planned meals for the week. His daily diet includes a breakfast of eight egg whites and a cup of oatmeal, a lunch with plenty of fruit and a ground turkey burger, a post-workout protein shake with more fruit and a supper of four to five ounces of lean meat and assorted nuts. White says his regimen has not only turned his fat to muscle but has also transformed his palate. A year into training, he ordered a fried po’boy — one of his old favorites — and was surprised at his disgust. “I didn’t enjoy the taste anymore,” he says. “It was terrible, rancid. Fried food just doesn’t appeal to me anymore.”

Dr. Kent White embraces the stringent diet necessary for bodybuilding and weightlifting, but after more than a decade of training, he still won’t eat broccoli or cauliflower. His weakness? Sweets. “The hardest thing for me to pass up is chocolate ice cream,” he says.