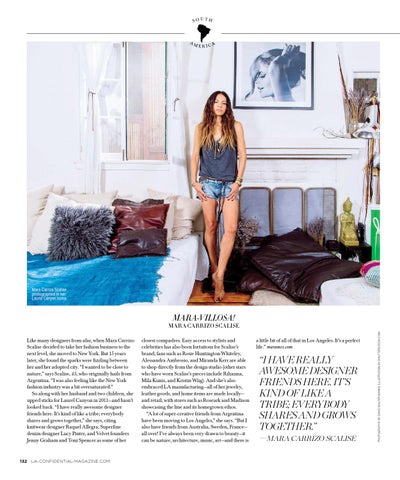 Like many designers from afar, when Mara Carrizo Scalise decided to take her fashion business to the next level, she moved to New York. But 15 years later, she found the sparks were fizzling between her and her adopted city. “I wanted to be close to nature,” says Scalise, 43, who originally hails from Argentina. “I was also feeling like the New York fashion industry was a bit oversaturated.” So along with her husband and two children, she upped sticks for Laurel Canyon in 2011—and hasn’t looked back. “I have really awesome designer friends here. It’s kind of like a tribe; everybody shares and grows together,” she says, citing knitwear designer Raquel Allegra, Superfine denim designer Lucy Pinter, and Velvet founders Jenny Graham and Toni Spencer as some of her

closest compadres. Easy access to stylists and celebrities has also been fortuitous for Scalise’s brand; fans such as Rosie Huntington-Whiteley, Alessandra Ambrosio, and Miranda Kerr are able to shop directly from the design studio (other stars who have worn Scalise’s pieces include Rihanna, Mila Kunis, and Kristin Wiig). And she’s also embraced LA manufacturing—all of her jewelry, leather goods, and home items are made locally— and retail, with stores such as Roseark and Madison showcasing the line and its homegrown ethos. “A lot of super-creative friends from Argentina have been moving to Los Angeles,” she says. “But I also have friends from Australia, Sweden, France— all over! I’ve always been very drawn to beauty—it can be nature, architecture, music, art—and there is

a little bit of all of that in Los Angeles. It’s a perfect life.” maramcs.com

“I HAVE REALLY AWESOME DESIGNER FRIENDS HERE. IT’S KIND OF LIKE A TRIBE; EVERYBODY SHARES AND GROWS TOGETHER.” —MARA CARRIZO SCALISE 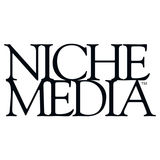