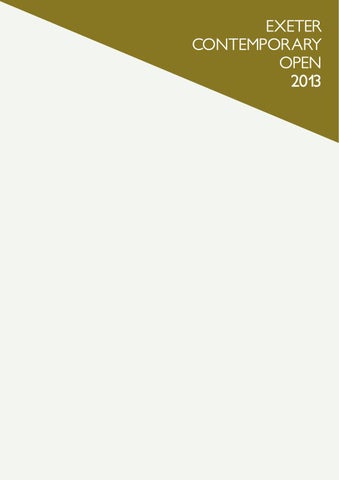 Exeter Contemporary Open is an annual exhibition open to submissions in any media from contemporary visual artists from across the UK and beyond. The exhibition aims to be a platform for the most talented emerging artists and to reflect current themes and concerns in contemporary art practice. The selected artists are eligible to receive a £1000 Overall Award, £500 Additional Award and £200 Audience Choice Award. The 2013 selection and judging panel consisted of artist and curator Kevin Hunt, independent curators Day + Gluckman and Phoenix Gallery curator Matt Burrows. Although the exhibition is not selected thematically, a distinct interest in materiality can be seen weaving through this year’s show. Texture, surface and the physicality of objects, images and subject matter underpin much of the work, bringing a range of references into play. Generous support for the exhibition has been provided by our main sponsor Haines Watts Chartered Accountants, along with additional support from St Austell brewery, Exeter Natural Health Clinic and our media partner Big Issue magazine.

CHARLIE GODET THOMAS The expression that there is nothing to express, nothing with which to express, no desire to express, along with the obligation to express. 1 Charlie Godet Thomas explores images and objects, transforming them through the antithetical use of sculpture, installation, collage and photography. More interested in the tone of a work than confining it to a particular medium or genre, he works in a language of contradictions – humour and melancholia, the two-dimensional and the sculptural, reduction and assemblage, design and the incidental, the personal and the universal. His works, just as life is, are a product of these oppositional forces.

I translate the everyday through making, revealing that it is at once sad and delightful, “our greatest blessing and most despicable complacency”. 2 1. Samuel Beckett, from the Duthuit Dialogues 2. The artist, quoting Ben Highmore, Ordinary Lives

Rachel Busby Rachel Busbyâ&#x20AC;&#x2122;s paintings present a kind of storyboard of the artistâ&#x20AC;&#x2122;s rural life in Wales. Selective memories, true stories and ancient histories bind together the passage of time. Each piece is worked to an exacting sense, whether it be touch, smell or sound. Within the setting of an unforgiving yet beautiful landscape, her work looks towards its inhabitants and ponders over their curious frontier mentality. Big spaces breeding secrets, cultivating strange habits and lawlessness. These works are interiors - looking out, looking in. Weather bound. Long, dark stormy winter months, the gloom, the heaviness weighing on the mind. Cheap interiors, fake wood Formica, plastic tables, floral wall paper. Harsh fluorescent lighting. Beige. Cheap and nasty. re-title.com/artists/rachel-busby

REBECCA OUNSTEAD In Rebecca Ounsteadâ&#x20AC;&#x2122;s work, objects and materials are arranged, manipulated and fabricated in order to create visual displays that are concerned with consumerism, construct, trend, patternation and material association. Self-consciously responding to current vogues, colours and materials, her works exude a fetishistic and tactile materiality and suggest the potential for physical activation and interaction. The photographs from her Hand Made and Hand Painted Object Arrangement Series (2013) explore a sense of slippage between a manufactured aesthetic and a more naĂŻve, hand crafted quality. Her arrangements take influence from high fashion window displays, modes of archive and display in museums and galleries as well as domestic decor, travel agents and gift shops. Able to mutate and adjust to the spaces in which they appear, her sculptural works endeavour to stimulate an aesthetic pleasure and to titillate the observer. rebeccaounstead.com

MAX CAHN Max Cahnâ&#x20AC;&#x2122;s paintings tend to depict structures that resemble tables, beds and platforms. A suggestion of the everyday and familiar is stripped right back, at times to the barest point of recognition, easily misconstrued and falling into abstract form. The sense of reality, invited through the use of perspective, light, shadow and form, is resisted and forced apart by agitated, abstracted elements that remind us of the physicality of paint; thick wet on wet impastos that are alive with spontaneous dynamic brush strokes, paint that is sticky and viscous, unpredictable and in a state of constant exploration. For the artist, these uncanny objects, recognisable yet alien, become platforms for psychological or emotional states that are not exactly autobiographical but are an extension of something personal; offering a dual dimensional experience, lying somewhere between object and hallucinated vision. maxcahn.co.uk

julie price Julie Price playfully explores figuration and abstraction through an interdisciplinary practice that encompasses drawing, collage, painting and sculpture. Bringing hidden elements of the everyday into her work, she aims to highlight both familiar and unfamiliar devices we may experience in our daily lives to the point of absurdity. Upholstery foam, chosen for its colour and malleability, is employed as a familiar domestic material that converts seamlessly into the formless and unfamiliar. Its colours, along with those of supporting objects like tea trolleys and occasional tables, are reflected and exaggerated in cartoon-like paintings that coexist alongside their sculptural counterparts. Painterly associations are made with the way the foam folds and intertwines, itâ&#x20AC;&#x2122;s compressed mass suggestive of brush strokes on canvas. While potential is suggested for narrative and a relationship between object and painting, each also manages to maintain its own individual character. julie-price.co.uk

ANNE DEEMING With an outward appearance of familiarity and possible functionality, Anne Deemingâ&#x20AC;&#x2122;s objects might trigger an association or memory of something you have used or seen before. For Deeming, these useless, beautiful, objects of desire, neither functional nor purely ornament, encompass much about craft, time and the ambiguity of things. Her points of reference range from litter, recycling and abandoned furniture she photographs in the street, to domestic or industrial objects, such as soap dishes, door handles and thermostats - pulling them together to form new prototypes and hybrid objects. Repetitively cast in minimal materials like plaster or resin, her objects are often supported or held by contrasting materials such as rubber or fabric. Crucially for the artist, this process-led way of making creates objects that, while initially appearing identical and machine made, are actually unique and handcrafted. annedeeming.com

MALINA BUSCH Malina Buschâ&#x20AC;&#x2122;s practice is influenced by the shifting and temporal nature of her surroundings and the traces that the passage of time leaves behind. The process of making acts as a way of lending physical form to the traces left behind by time - a place where materials are used to reconsider and reinvent specific memories. The artist explores these ephemeral qualities through pieces that remove the boundaries between painting, drawing, and sculpture in order to offer different perspectives on an experience. Each evolves in her studio through intuitive processes - where materials are allowed to be reshaped by the layering of time, memory, and the imagination. Similar to the process of attempting to remember an event; each form, mark, or colour comes to the foreground to exist briefly within the experience of the artwork before dissolving. malinabusch.com

OLIVER TIRRE With a practice that combines collage, painting and sculpture, often in the same object, Oliver Tirre examines how an image can be relieved from its language. Through slight gestures and processes of disjunction or fragmentation, he aims to wipe and re-route its original identity so that a new and totally autonomous existence may be formed. His subtle installations and environments aim to highlight the space found in-between spaces. Works situated in these ‘gaps’ have a very particular placement in relation to form, space and time, often extending beyond the object itself and onto the fabric and space of the gallery. In Nameless (L’appel du Vide), 2013, for example, an obliquely collaged fragment of wood appears to be arbitrarily taped to the wall. Its title - a phrase without a direct English translation - refers to the particular sensation of wanting to leap when near a cliff edge or bridge, a sense of tangible proximity to the void. olivertirre.com

HANNAH MOONEY With a practice that includes collage, drawing and, in this case, video work, Hannah Mooney investigates the urge to succeed or be victorious - embodying these emotions in the portrayal of basic physical actions. She aims to confront and enact idealised notions and desires, inviting the revelation of the pathetic, the humiliating and above all the failure at the heart of their attempted realisation. Mooney believes that within all failure there is success - humour being the strongest of the outcomes. Her tragi-comic video work, Try Walking In My Hooves, You Poser (2013) is a reflection on how she perceives herself walking in a pair of high heels; â&#x20AC;&#x153;I may pose, strut and trot as gracefully as I possibly can, but at the end of the day - I walk like a horseâ&#x20AC;?. cargocollective.com/hannahmooney