One Purpose Magazine Annual Issue - May 2020 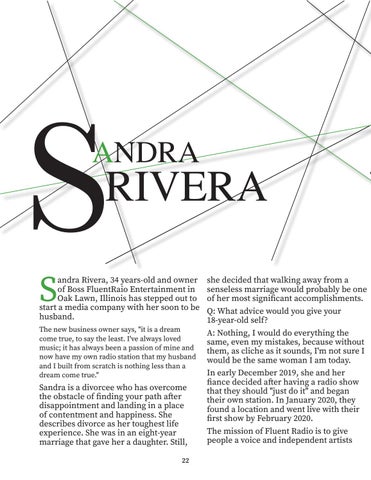 andra Rivera, 34 years-old and owner of Boss FluentRaio Entertainment in Oak Lawn, Illinois has stepped out to start a media company with her soon to be husband. The new business owner says, &quot;it is a dream come true, to say the least. I&#39;ve always loved music; it has always been a passion of mine and now have my own radio station that my husband and I built from scratch is nothing less than a dream come true.&quot;

Sandra is a divorcee who has overcome the obstacle of finding your path after disappointment and landing in a place of contentment and happiness. She describes divorce as her toughest life experience. She was in an eight-year marriage that gave her a daughter. Still, 22

she decided that walking away from a senseless marriage would probably be one of her most significant accomplishments. Q: What advice would you give your 18-year-old self? A: Nothing, I would do everything the same, even my mistakes, because without them, as cliche as it sounds, I&#39;m not sure I would be the same woman I am today. In early December 2019, she and her fiance decided after having a radio show that they should &quot;just do it&quot; and began their own station. In January 2020, they found a location and went live with their first show by February 2020. The mission of Fluent Radio is to give people a voice and independent artists

One Purpose Magazine Annual Issue - May 2020

A few topics to show my reader that I am still working and building One Purpose Magazine. I hope you're encourage. 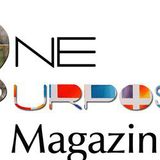