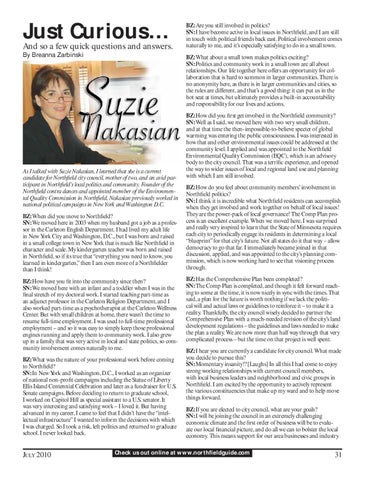 BZ: Are you still involved in politics? SN: I have become active in local issues in Northfield, and I am still in touch with political friends back east. Political involvement comes naturally to me, and it’s especially satisfying to do in a small town.

BZ: What about a small town makes politics exciting? SN: Politics and community work in a small town are all about relationships. Our life together here offers an opportunity for collaboration that is hard to summon in larger communities. There is no anonymity here, as there is in larger communities and cities, so the rules are different, and that’s a good thing: it can put us in the hot seat at times, but ultimately provides a built-in accountability and responsibility for our lives and actions.

And so a few quick questions and answers.

As I talked with Suzie Nakasian, I learned that she is a current candidate for Northfield city council, mother of two, and an avid participant in Northfield’s local politics and community. Founder of the Northfield contra dances and appointed member of the Environmental Quality Commission in Northfield, Nakasian previously worked in national political campaigns in New York and Washington D.C. BZ: When did you move to Northfield? SN: We moved here in 2003 when my husband got a job as a professor in the Carleton English Department. I had lived my adult life in New York City and Washington, D.C., but I was born and raised in a small college town in New York that is much like Northfield in character and scale. My kindergarten teacher was born and raised in Northfield, so if its true that “everything you need to know, you learned in kindergarten,” then I am even more of a Northfielder than I think! BZ: How have you fit into the community since then? SN: We moved here with an infant and a toddler when I was in the final stretch of my doctoral work. I started teaching part-time as an adjunct professor in the Carleton Religion Department, and I also worked part-time as a psychotherapist at the Carleton Wellness Center. But with small children at home, there wasn’t the time to resume full-time employment. I was used to full-time professional employment – and so it was easy to simply keep those professional engines running and apply them to community work. I also grew up in a family that was very active in local and state politics, so community involvement comes naturally to me. BZ: What was the nature of your professional work before coming to Northfield? SN: In New York and Washington, D.C., I worked as an organizer of national non-profit campaigns including the Statue of Liberty Ellis Island Centennial Celebration and later as a fundraiser for U.S. Senate campaigns. Before deciding to return to graduate school, I worked on Capitol Hill as special assistant to a U.S. senator. It was very interesting and satisfying work – I loved it. But having advanced in my career, I came to feel that I didn’t have the “intellectual infrastructure” I wanted to inform the decisions with which I was charged. So I took a risk, left politics and returned to graduate school. I never looked back.

BZ: How did you first get involved in the Northfield community? SN: Well as I said, we moved here with two very small children, and at that time the then-impossible-to-believe specter of global warming was entering the public consciousness. I was interested in how that and other environmental issues could be addressed at the community level. I applied and was appointed to the Northfield Environmental Quality Commission (EQC), which is an advisory body to the city council. That was a terrific experience, and opened the way to wider issues of local and regional land use and planning with which I am still involved. BZ: How do you feel about community members’ involvement in Northfield politics? SN: I think it is incredible what Northfield residents can accomplish when they get involved and work together on behalf of local issues! They are the power-pack of local governance! The Comp Plan process is an excellent example. When we moved here, I was surprised and really very inspired to learn that the State of Minnesota requires each city to periodically engage its residents in determining a local “blueprint” for that city’s future. Not all states do it that way – allow democracy to go that far. I immediately became joined in that discussion, applied, and was appointed to the city’s planning commission, which is now working hard to see that visioning process through. BZ: Has the Comprehensive Plan been completed? SN: The Comp Plan is completed, and though it felt forward reaching to some at the time, it is now nicely in sync with the times. That said, a plan for the future is worth nothing if we lack the political will and actual laws or guidelines to reinforce it – to make it a reality. Thankfully, the city council wisely decided to partner the Comprehensive Plan with a much-needed revision of the city’s land development regulations – the guidelines and laws needed to make the plan a reality. We are now more than half way through that very complicated process – but the time on that project is well spent. BZ: I hear you are currently a candidate for city council. What made you decide to pursue this? SN: Momentary insanity!? [Laughs] In all this I had come to enjoy strong working relationships with current council members, with local business leaders and neighborhood and civic groups in Northfield. I am excited by the opportunity to actively represent the various constituencies that make up my ward and to help move things forward. BZ: If you are elected to city council, what are your goals? SN: I will be joining the council in an extremely challenging economic climate and the first order of business will be to evaluate our local financial picture, and do all we can to bolster the local economy. This means support for our area businesses and industry

Check us out online at www.northfieldguide.com

An array of happenings for the month of July including arts, dance, music, food, theater and more. This month features the annual Crazy Days section, as well as a call to visaul artists for next month's issue. Also, find a sneek preview for next month's special, yet seperate Vintage Band Festival Program! 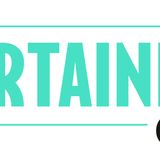