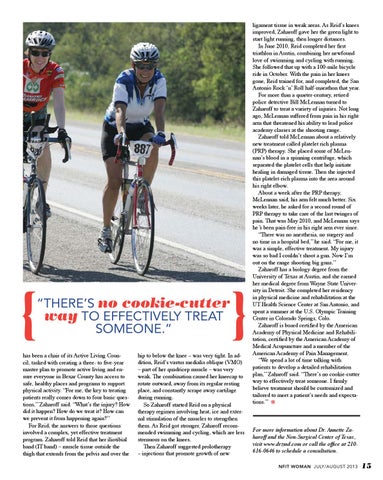 “There’s no cookie-cutter way to effectively treat someone.”

has been a chair of its Active Living Council, tasked with creating a three- to five-year master plan to promote active living and ensure everyone in Bexar County has access to safe, healthy places and programs to support physical activity. “For me, the key to treating patients really comes down to four basic questions,” Zaharoff said. “What’s the injury? How did it happen? How do we treat it? How can we prevent it from happening again?” For Reid, the answers to those questions involved a complex, yet effective treatment program. Zaharoff told Reid that her iliotibial band (IT band) – muscle tissue outside the thigh that extends from the pelvis and over the

hip to below the knee – was very tight. In addition, Reid’s vastus medialis oblique (VMO) – part of her quadricep muscle – was very weak. The combination caused her kneecap to rotate outward, away from its regular resting place, and constantly scrape away cartilage during running. So Zaharoff started Reid on a physical therapy regimen involving heat, ice and external stimulation of the muscles to strengthen them. As Reid got stronger, Zaharoff recommended swimming and cycling, which are less strenuous on the knees. Then Zaharoff suggested prolotherapy – injections that promote growth of new

ligament tissue in weak areas. As Reid’s knees improved, Zaharoff gave her the green light to start light running, then longer distances. In June 2010, Reid completed her first triathlon in Austin, combining her newfound love of swimming and cycling with running. She followed that up with a 100-mile bicycle ride in October. With the pain in her knees gone, Reid trained for, and completed, the San Antonio Rock ‘n’ Roll half-marathon that year. For more than a quarter-century, retired police detective Bill McLennan turned to Zaharoff to treat a variety of injuries. Not long ago, McLennan suffered from pain in his right arm that threatened his ability to lead police academy classes at the shooting range. Zaharoff told McLennan about a relatively new treatment called platelet rich plasma (PRP) therapy. She placed some of McLennan’s blood in a spinning centrifuge, which separated the platelet cells that help initiate healing in damaged tissue. Then she injected this platelet-rich plasma into the area around his right elbow. About a week after the PRP therapy, McLennan said, his arm felt much better. Six weeks later, he asked for a second round of PRP therapy to take care of the last twinges of pain. That was May 2010, and McLennan says he’s been pain-free in his right arm ever since. “There was no anesthesia, no surgery and no time in a hospital bed,” he said. “For me, it was a simple, effective treatment. My injury was so bad I couldn’t shoot a gun. Now I’m out on the range shooting big guns.” Zaharoff has a biology degree from the University of Texas at Austin, and she earned her medical degree from Wayne State University in Detroit. She completed her residency in physical medicine and rehabilitation at the UT Health Science Center at San Antonio, and spent a summer at the U.S. Olympic Training Center in Colorado Springs, Colo. Zaharoff is board certified by the American Academy of Physical Medicine and Rehabilitation, certified by the American Academy of Medical Acupuncture and a member of the American Academy of Pain Management. “We spend a lot of time talking with patients to develop a detailed rehabilitation plan,” Zaharoff said. “There’s no cookie-cutter way to effectively treat someone. I firmly believe treatment should be customized and tailored to meet a patient’s needs and expectations.” ✽

For more information about Dr. Annette Zaharoff and the Non-Surgical Center of Texas, visit www.drzmd.com or call the office at 210616-0646 to schedule a consultation. NFIT WOMAN july/august 2013

To be the premier comprehensive guide for San Antonio women and men on their transformational journey toward health and wellness. 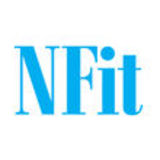