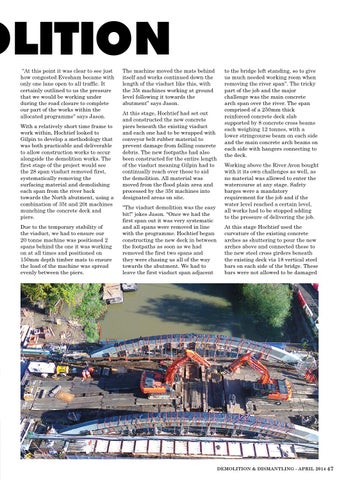 OLITION “At this point it was clear to see just how congested Evesham became with only one lane open to all traffic. It certainly outlined to us the pressure that we would be working under during the road closure to complete our part of the works within the allocated programme” says Jason. With a relatively short time frame to work within, Hochtief looked to Gilpin to develop a methodology that was both practicable and deliverable to allow construction works to occur alongside the demolition works. The first stage of the project would see the 28 span viaduct removed first, systematically removing the surfacing material and demolishing each span from the river back towards the North abutment, using a combination of 35t and 20t machines munching the concrete deck and piers.

Due to the temporary stability of the viaduct, we had to ensure our 20 tonne machine was positioned 2 spans behind the one it was working on at all times and positioned on 150mm depth timber mats to ensure the load of the machine was spread evenly between the piers.

The machine moved the mats behind itself and works continued down the length of the viaduct like this, with the 35t machines working at ground level following it towards the abutment” says Jason.

At this stage, Hochtief had set out and constructed the new concrete piers beneath the existing viaduct and each one had to be wrapped with conveyor belt rubber material to prevent damage from falling concrete debris. The new footpaths had also been constructed for the entire length of the viaduct meaning Gilpin had to continually reach over these to aid the demolition. All material was moved from the flood plain area and processed by the 35t machines into designated areas on site.

“The viaduct demolition was the easy bit!” jokes Jason. “Once we had the first span out it was very systematic and all spans were removed in line with the programme. Hochtief began constructing the new deck in between the footpaths as soon as we had removed the first two spans and they were chasing us all of the way towards the abutment. We had to leave the first viaduct span adjacent

to the bridge left standing, so to give us much needed working room when removing the river span”. The tricky part of the job and the major challenge was the main concrete arch span over the river. The span comprised of a 250mm thick reinforced concrete deck slab supported by 8 concrete cross beams each weighing 12 tonnes, with a lower stringcourse beam on each side and the main concrete arch beams on each side with hangers connecting to the deck.

Working above the River Avon bought with it its own challenges as well, as no material was allowed to enter the watercourse at any stage. Safety barges were a mandatory requirement for the job and if the water level reached a certain level, all works had to be stopped adding to the pressure of delivering the job.

At this stage Hochtief used the curvature of the existing concrete arches as shuttering to pour the new arches above and connected these to the new steel cross girders beneath the existing deck via 18 vertical steel bars on each side of the bridge. These bars were not allowed to be damaged 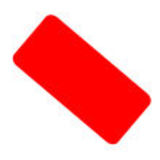