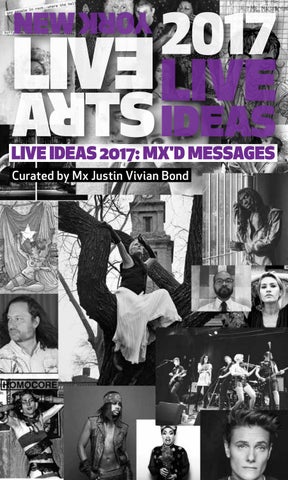 Curator's Note When I was asked to curate the 2017 Live Ideas Festival at New York Live Arts we were just at the beginning of a harrowing presidential election cycle in the United States, Brexit seemed like a long shot, and North Carolina's "bathroom bill" had not yet been signed. As history has proven time and again, for better or worse, things can change very quickly. We’re living in an extremist age. Religious extremism is tearing entire cultures apart, racism continues to divide communities in violent ways and gender fundamentalism is used as a justification to torment and bully gender non-conforming people worldwide. Now more than ever, it is imperative that we join with people from all parts of the world in reexamining our strategies in support of women’s rights, people of color, protections for LGBTQI Communities, religious tolerance, migrant populations and the environment. There is nothing we can take for granted, as misguided patriarchal tropes, xenophobia, economic disparity and populist nationalism seem to be undermining so many of our basic human needs and freedoms.

I’ve been working closely with Bill T. Jones, Janet Wong and Elizabeth Koke to create what we've decided to call Mx’d Messages, an exploration of non-binary strategies to approach some of the most vexing and wide-ranging problems our planet is now facing. We’re bringing together artists, activists, academics, educators, doulas, filmmakers, writers and performers to talk about new ways to approach old problems. If it sounds like we hope to accomplish a lot in just a few days then you're right. YES! We do. Coming of age as an activist and artist in the face of Republican rule and the AIDS epidemic, one cultural phenomenon that was truly inspiring to me was the Queercore scene I was first exposed to in San Francisco in the late 1980s. It seems obvious to me now that the queer anarchists who emerged out of the anti-assimilationist underground of the early Gay Liberation Front along with the radical AIDS activists of that era had a tremendous influence on what found it's way into academia as Queer Theory.  The influence of Queercore can be seen in so many of the topics and themes we're contemplating in this festival that it seems fitting and timely to bring together some of the players from the early Queercore Movement to discuss the transformative power of punk as the festival’s keynote, and to close our festival with a punk-themed Vernal Equinox celebration. We all know that we have a lot of work to do. But it’s up to us to come together and drive the narratives of our own time, to build the future we feel safe and comfortable living in.

and when we develop innovative strategies for existing and thriving in the face of extremes and imposing paradigms. Besides, what else should we do in MARCH!?! Otherwise we'll just be sitting around waiting for Spring to come and that's going to happen anyway.

Keynote Conversation: Queer as in F@*K You: Under the Influence of Homocore Theater, Tickets start at $15

SCHEDULE AT A GLANCE MAR 17 1PM

Happy Hour: UN Commission on the Staus of Women: Where is my Box? Studio, Tickets start at $10

Workshop: What Would An HIV Doula Do? Studio, Free with suggested donation

Queer as in F@*K You: Under the Influence of Homocore Tickets start at $15 $75 VIP Tickets include Pre-show Reception New York Live Arts Theater Moderated by Kenny Mellman of Kiki and Herb with musician, writer and performer Lynn Breedlove, the conversation will look at the transformative powers of Punk through the lens of Homocore/Queercore. "The Queercore scene grew out of a generation that bristled against what it saw as the bourgeois trappings of a mainstream gay lifestyle and the macho, hetero hardcore scene that punk -- a movement founded by women, people of color, and gays -- had become. Queercore was a call to arms and storming out of the closet.â&#x20AC;? Out Magazine

Best known for being the first woman with a contract as a male Ford Model, the artist/activist and former Olympic swimmer will share her forthcoming memoir Godspeed at this Lunchtime Reading. Publisher- Atria Books /Simon and Schuster

A selection of readings organized by the Vetch Poetry Journal, the first literary journal devoted to transgender writers.

BGSQD Pop-up Bookstore BGSQD will be setting up a bookstore offering queer literature in the Live Gallery. Books for sale will include authors featured in the festival. The Bureau of General Servicesâ&#x20AC;&#x201D;Queer Division is an independent, all-volunteer queer cultural center, bookstore, and event space hosted by The Lesbian, Gay, Bisexual & Transgender Community Center in New York City.

Bight of the Twin Directed by Hazel Hill McCarthy III Transcending assumptions of what it means to be “gendered,” Genesis Breyer P-Orridge and late wife Lady Jaye underwent a series of surgical procedures to become physically identical to one another, seeking to perfect a gender-neutral state through a process they termed Pandrogyny. In 2007, Jaye unexpectedly died of cancer. Genesis has maintained the concept of the Pandrogyne and continues to self-reference in the plural (“we”) and uses the selfprescribed gender neutral “s/he”, “h/er”. As Genesis puts it, since Lady Jaye “dropped h/er body” s/he is the half of the Pandrogyne in the immaterial world, with Genesis being the half in the material world,

Stadt Der Verlorenen Seelen (City of Lost Souls) Directed by Rosa Von Praunheim Angie Stardust has a lot on her plate, running a boarding house called Pension Stardust filled with misfit lodgers: an erotic trapeze duo, a magikal group therapist, assorted layabouts, nymphomaniacs and Lila (Jayne County), a Southern blonde who dreams of Hollywood. These tenants also staff Angie’s fast food enterprise, Burger Queen. But when Lila gets knocked up by a Communist who promises to make her a superstar on East Berlin television, the real havoc ensues. Rosa Von Praunheim directs this mostly American cast in a trans musical spectacular that has been described as “Hedwig and the Angry Inch… in reverse.”

HAPPY HOUR Tickets start at $10 3rd Floor Studios Grab a drink from the Live Gallery Cafe and settle down for Happy Hour with a series of conversations with artists, activists, academics, and innovators.

What are the possibilities when we consider how the study of beliefs, spiritual practices, and the divine are always already “trans”? Join our panelists theologian Linn Marie Tonstad, artist/activist Viva Ruiz, Wazina Zondon (Coming Out Muslim) and Rabbi Mark Sameth whose New York Times article “Is God Transgender” went viral. Moderated by Barbara Carrellas, author of Urban Tantra. UN Commission on the Status of Women: Where is my Box? Presented in conjunction with OutRight Action International and on the occasion of the 2017 United Nations Commission on the Status of Women, the panel will consider the inherent challenges and possibilities of creating a future without the binary language of gender identity and sexual orientation while also advocating for the rights of women and gender non-conforming people around the world. Panelists to include ACLU staff attorney Chase Strangio. The panel is moderated by Siri May, United Nations Program Coordinator with OutRight Action International. The Road to Trans Visibility: Roles, Trolls, and Tolls Transgender visibility in the media is at an all-time high, with film and television, fashion shoots and advertising campaigns featuring trans talent. Model Casey Legler, television and film director Silas Howard, among others, discuss the responsibilities and challenges, if any, of being a trans person in the public eye during this cultural moment. Moderated by performer/activist Kate Bornstein,

The TEAM RoosevElvis (Re-MX’D) Tickets start at $15 New York Live Arts Theater On a hallucinatory road trip from the Badlands to Graceland, the spirits of Elvis Presley and Theodore Roosevelt battle over the soul of Ann, a painfully shy meat-processing plant worker, and what kind of man or woman Ann should become. A duet performed by actresses Libby King and Kristen Sieh and set against the boundless blue skies of the Great Plains and endless American highway, RoosevElvis (Re-MX'D) is a specially re-imagined performance for Live Ideas of The TEAM's internationally acclaimed work about gender, appetite, and the multitudes we contain.

What Would An HIV Doula Do? The What Would an HIV Doula Do? collective will host a participatory workshop about how to honor, support and activate transitions in personal health and the political climate through the lens of the ongoing AIDS crisis. The collective will partner with members of the 1990s group WAVE (Women's AIDS Video Enterprise): caregivers who used video, conscioussness raising, and collective action to make a positive difference early in the epidemic. Using video, writing prompts and group discussion, the two groups will explore current realities for people living with HIV, those deeply impacted, and folks who wish to be more involved. People living with HIV, and those providing related care are encouraged to attend. What Would An HIV Doula Do? is a collective of artists, activists, academics, chaplains, doulas, healthcare practitioners, nurses, filmmakers, AIDS Service Organization employees, dancers, community educators, and others both living with HIV, and those deeply impacted, joined in response to the ongoing AIDS crisis. We understand a doula as someone in community who holds space for others during a time of transition. For us, HIV is a series of moments in someoneâ&#x20AC;&#x2122;s life that does not start with diagnosis nor end with treatment or death. Foundational to our process is asking questions. hivdoula.tumblr.com

Open XHOIR Practice Led By Colin Self Xhoir is a non-utilitarian vocal ensemble founded by Colin Self in 2014. Primarily hosted at the home residence of queer family space Casa Diva, Xhoir approaches group singing from an exploratory somatic perspective, encouraging participants to re-examine their relationship to individual and collective voice. Born out of research for Colin & Raul's 2014 opera The Fool (Elation V), Xhoir began as a vocal coven for local queer witches to explore energetic transformation through group singing. Hybridizing techniques from Sacred Harp Singing to Shape-Note, Neo-Pagan and Raga, Xhoir grants participants a porous atmosphere to examine the act of listening and singing, developing a broader perspective on how the voice can be used as an instrument of change. As an opportunity to introduce the general public to XHOIR, Colin along with several colleagues will co-author a vocal session. Participation is free and previous vocal or choral experience is not required. Following the completion of this session, all participants will be granted access to multi-channel recordings of the days recordings.

What Would An HIV Doula Do?

What Would An HIV Doula Do?

OSTARA BALL The Dauphine of Bushwick Photo by Fred Attenborough

The Homobiles Photo by Cherylynn Tsushima

New York Live Arts is home to some of the most forward-thinking conversations about the world that we create together. Artists who present on our stage share an unparalleled intellectual and physical rigor in their investigations of movement and body-based art. Ours is a community of leaders, movers, and cultural shapers who care about finding new, more celebratory and transcendent ways of being together-- and we want you to join us. With a New York Live Arts membership (starting at just $40!), you'll enjoy a full spectrum of benefits designed specifically to enhance your experience, including: ○ 20% off ticket purchases ○ waived ticket handling fees ○ discounts at our Live Gallery Cafe and on merchandise ○ free ticket exchange for a different performance of the same program ○ advance notice of ticket sales and special events like this one Our most generous members receive access to closed performances of the Bill T. Jones/Arnie Zane Company, invitations to behind-thescenes events, and opportunities to engage with genre-expanding artists like Mx Justin Vivian Bond, Trajal Harrell, Richard Move, and Kate Bornstein. Join today by visiting newyorklivearts.org/join or contact Development Associate Tristan Powell at 212.691.6599 x379 or tpowell@newyorklivearts.org.