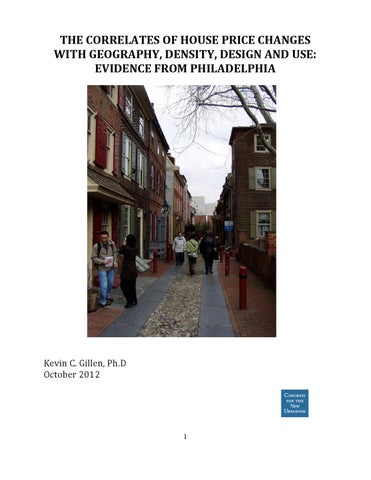 THE CORRELATES  OF  HOUSE  PRICE  CHANGES   WITH  GEOGRAPHY,  DENSITY,  DESIGN  AND  USE:   EVIDENCE  FROM  PHILADELPHIA

Although the year of the founding these cities may be considered old, their growth into large cities has only occurred in recent decades. 2 A separate house price index was estimated for each Zip Code using a hybrid hedonic regression with Ln(Price) as the dependent variable. For the region and most Zips in it, the peak of the index occurred in mid-2007 and the trough occurred in early 2012.

Figure 4.    Philadelphia-­‐area  home  sales  in  2012  Q2   Philadelphia Region House Sales in 2012 Q2 Color Coded by Price/SqFt Sales are color-coded by the quintiles of the distribution of $Price/SqFt. Hence, each of the five categories covers exactly 20% of all sales.

The indices were estimated via regression, using a hybrid hedonic specification and the universe of all home sales in the MSA during the 1980-2012 period. 5 Center City is geographically defined as Zip Codes 19102, 19103, 19106 and 19107. They cover the approximately two square miles encompassing Philadelphia’s downtown urban core, which has the highest density of both businesses and residents in both the city and region.

Livable streets  arranged  in  compact,  walkable  blocks.   A  range  of  housing  choices  to  serve  people  of  diverse  ages  and  income  levels.   Schools,  stores  and  other  nearby  destinations  reachable  by  walking,  bicycling  or   transit  service.   An  affirming,  human-­‐scaled  public  realm  where  appropriately  designed  buildings   define  and  enliven  streets  and  other  public  spaces.   The   following   table   gives   the   community-­‐level   characteristics   of   the   housing   stock   and  neighborhoods  in  the  region,  which  were  collected  at  the  Zip  Code  level:

distance to  the  Philadelphia  CBD

number of  bus  stops  in  the  zipcode

number of  commuter  rail  stops  in  the  zip  code 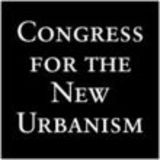 Congress for the New Urbanism

THE CORRELATES OF HOUSE PRICE CHANGES WITH GEOGRAPHY, DENSITY, DESIGN AND USE

THE CORRELATES OF HOUSE PRICE CHANGES WITH GEOGRAPHY, DENSITY, DESIGN AND USE