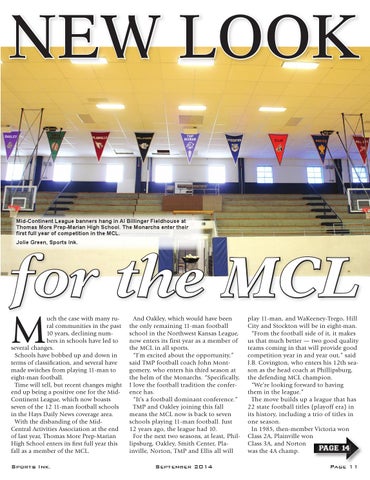 uch the case with many rural communities in the past 10 years, declining numbers in schools have led to several changes. Schools have bobbed up and down in terms of classification, and several have made switches from playing 11-man to eight-man football. Time will tell, but recent changes might end up being a positive one for the MidContinent League, which now boasts seven of the 12 11-man football schools in the Hays Daily News coverage area. With the disbanding of the MidCentral Activities Association at the end of last year, Thomas More Prep-Marian High School enters its first full year this fall as a member of the MCL. Sports Ink.

And Oakley, which would have been the only remaining 11-man football school in the Northwest Kansas League, now enters its first year as a member of the MCL in all sports. “I’m excited about the opportunity,” said TMP football coach John Montgomery, who enters his third season at the helm of the Monarchs. “Specifically, I love the football tradition the conference has. “It’s a football dominant conference.” TMP and Oakley joining this fall means the MCL now is back to seven schools playing 11-man football. Just 12 years ago, the league had 10. For the next two seasons, at least, Phillipsburg, Oakley, Smith Center, Plainville, Norton, TMP and Ellis all will September 2014

play 11-man, and WaKeeney-Trego, Hill City and Stockton will be in eight-man. “From the football side of it, it makes us that much better — two good quality teams coming in that will provide good competition year in and year out,” said J.B. Covington, who enters his 12th season as the head coach at Phillipsburg, the defending MCL champion. “We’re looking forward to having them in the league.” The move builds up a league that has 22 state football titles (playoff era) in its history, including a trio of titles in one season. In 1985, then-member Victoria won Class 2A, Plainville won Class 3A, and Norton PAGE 14 was the 4A champ. Page 11 A magazine focusing on all things sports in northwest Kansas

A magazine focusing on all things sports in northwest Kansas