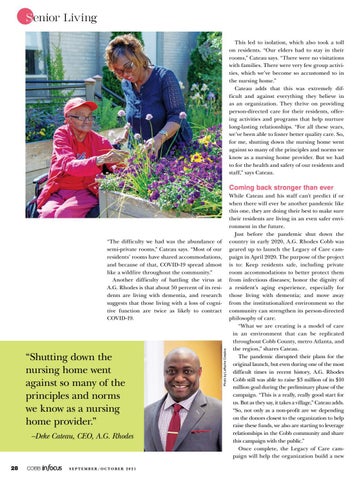 Senior Living This led to isolation, which also took a toll on residents. “Our elders had to stay in their rooms,” Cateau says. “There were no visitations with families. There were very few group activities, which we’ve become so accustomed to in the nursing home.” Cateau adds that this was extremely difficult and against everything they believe in as an organization. They thrive on providing person-directed care for their residents, offering activities and programs that help nurture long-lasting relationships. “For all these years, we’ve been able to foster better quality care. So, for me, shutting down the nursing home went against so many of the principles and norms we know as a nursing home provider. But we had to for the health and safety of our residents and staff,” says Cateau.

Coming back stronger than ever

“Shutting down the nursing home went against so many of the principles and norms we know as a nursing home provider.” –Deke Cateau, CEO, A.G. Rhodes

“The difficulty we had was the abundance of semi-private rooms,” Cateau says. “Most of our residents’ rooms have shared accommodations, and because of that, COVID-19 spread almost like a wildfire throughout the community.” Another difficulty of battling the virus at A.G. Rhodes is that about 50 percent of its residents are living with dementia, and research suggests that those living with a loss of cognitive function are twice as likely to contract COVID-19.

While Cateau and his staff can’t predict if or when there will ever be another pandemic like this one, they are doing their best to make sure their residents are living in an even safer environment in the future. Just before the pandemic shut down the country in early 2020, A.G. Rhodes Cobb was geared up to launch the Legacy of Care campaign in April 2020. The purpose of the project is to: Keep residents safe, including private room accommodations to better protect them from infectious diseases; honor the dignity of a resident’s aging experience, especially for those living with dementia; and move away from the institutionalized environment so the community can strengthen its person-directed philosophy of care. “What we are creating is a model of care in an environment that can be replicated throughout Cobb County, metro Atlanta, and the region,” shares Cateau. The pandemic disrupted their plans for the original launch, but even during one of the most difficult times in recent history, A.G. Rhodes Cobb still was able to raise $3 million of its $10 million goal during the preliminary phase of the campaign. “This is a really, really good start for us. But as they say, it takes a village,” Cateau adds. “So, not only as a non-profit are we depending on the donors closest to the organization to help raise these funds, we also are starting to leverage relationships in the Cobb community and share this campaign with the public.” Once complete, the Legacy of Care campaign will help the organization build a new