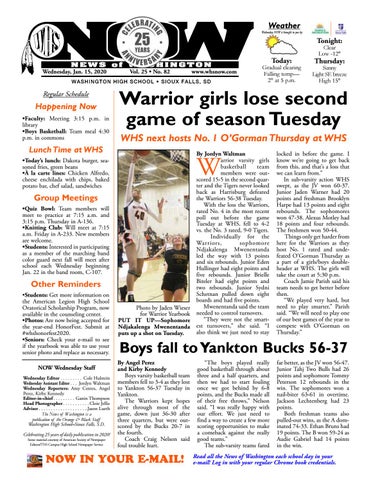 Wednesday NOW is brought to you by:

•Quiz Bowl: Team members will meet to practice at 7:15 a.m. and 3:15 p.m. Thursday in A-136. •Knitting Club: Will meet at 7:15 a.m. Friday in A-233. New members are welcome. •Students: Interested in participating as a member of the marching band color guard next fall will meet after school each Wednesday beginning Jan. 22 in the band room, C-107.

By Jordyn Waltman arrior varsity girls basketball team members were outscored 15-5 in the second quarter and the Tigers never looked back as Harrisburg defeated the Warriors 56-38 Tuesday. With the loss the Warriors, rated No. 4 in the most recent poll out before the game Tuesday at WHS, fell to 4-2 vs. the No. 3 rated, 9-0 Tigers. Individually for the Warriors, sophomore Ndjakalenga Mwenentanda led the way with 13 points and six rebounds. Junior Eden Hullinger had eight points and five rebounds. Junior Brielle Biteler had eight points and two rebounds. Junior Sydni Schetnan pulled down eight boards and had five points. Mwenentanda said the team needed to control turnovers. “They were not the smartest turnovers,” she said. “I also think we just need to stay

WHS next hosts No. 1 O’Gorman Thursday at WHS

•Students: Get more information on the American Legion High School Oratorical Scholarship Program, now available in the counseling center. •Photos: Are now being accepted for the year-end HonorFest. Submit at #whshonorfest2020. •Seniors: Check your e-mail to see if the yearbook was able to use your senior photo and replace as necessary.

Photo by Jaden Wieser for Warrior Yearbook PUT IT UP—Sophomore Ndjakalenga Mwenentanda puts up a shot on Tuesday.

locked in before the game. I know we’re going to get back from this, and that’s a loss that we can learn from.” In sub-varsity action WHS swept, as the JV won 60-37. Junior Jaden Warner had 20 points and freshman Brooklyn Harpe had 13 points and eight rebounds. The sophomores won 47-38. Alexus Motley had 18 points and four rebounds. The freshmen won 50-44. Things only get harder from here for the Warriors as they host No. 1 rated and undefeated O’Gorman Thursday as a part of a girls/boys doubleheader at WHS. The girls will take the court at 5:30 p.m. Coach Jamie Parish said his team needs to get better before then. “We played very hard, but need to play smarter,” Parish said. “We will need to play one of our best games of the year to compete with O’Gorman on Thursday.”

Boys fall to Yankton Bucks 56-37 By Angel Perez and Kirby Kennedy Boys varsity basketball team members fell to 3-4 as they lost to Yankton 56-37 Tuesday in Yankton. The Warriors kept hopes alive through most of the game, down just 36-30 after three quarters, but were outscored by the Bucks 20-7 in the fourth. Coach Craig Nelson said foul trouble hurt.

NOW IN YOUR E-MAIL!

“The boys played really good basketball through about three and a half quarters, and then we had to start fouling once we got behind by 6-8 points, and the Bucks made all of their free throws,” Nelson said. “I was really happy with our effort. We just need to find a way to create a few more scoring opportunities to make a comeback against the really good teams.” The sub-varsity teams fared

far better, as the JV won 56-47. Junior Tahj Two Bulls had 26 points and sophomore Tommy Peterson 12 rebounds in the win. The sophomores won a nail-biter 63-61 in overtime. Jackson Lechtenberg had 23 points. Both freshman teams also pulled-out wins, as the A dominated 74-33. Ethan Bruns had 19 points. The B won 59-24 as Audie Gabriel had 14 points in the win.

Read all the News of Washington each school day in your e-mail! Log in with your regular Chrome book credentials.

By Angel Perez and Kirby Kennedy Warrior gymnastics team members finished in 10th place with 113.35 team points at the Patty Jorgenson Invitational Saturday at Brookings High School. Watertown won the meet featuring most east-river AA teams with 145.275 points. Individually for the Warriors, senior Madeline Nelson finished 30th on the balance beam with a 7.525 and 27th in the floor exercise with a 7.525. Seniors Autumn Hullinger took 30th in vault with a 7.95 and Kia Gjoraas 39th in the uneven bars with a 7.35. All-around, Nelson and Hullinger tied for 23rd with 29.65 totals. Nelson said it was a competitive meet and the Warriors worked hard to do well. “It was good,” Nelson said. “There were a lot of teams there, so it was hard to focus on our own team. We need to work hard in practice and give it our all before the next meet.” The Warriors will next compete at Pierre T.F. Riggs High School Saturday at noon.

Amazing Amy: I can’t seem to get over this one person who has been with me for quite some time, but is no longer. Seeing them in the halls, and not being able to say “hi” to them makes me sad. I miss them and want them back, but I know it wouldn’t be a good idea. How do I get over my ex? -Sad Senior When you meet someone new, they can make you feel as if nothing could ever hurt you in this world. Their simple smile could cure any pain you have in your life and just their presence and knowing they are there with you makes you feel safe. Maybe I’m not the best person to ask for relationship advice, but I do know what it’s like to lose someone so special to you. It can feel as if you’ve lost a part of yourself that you might never get back. It’s okay to cry and be down for a bit, because its normal to have these emotions as a human, but don’t stay down there for too long. Pick yourself up and open your eyes and see the reality of life.

WHS next heads to Pierre Saturday

 Positions start at $10 per hour, depending on position.  Bonus pay opportunities available for those who qualify.  Flexible schedules for part-time positions; afternoons, evenings, and weekends.

I am not going to lie to you—losing someone that meant something to you is something very hard to get over, but we have our whole lives ahead of us. Right now we’re all just some teens bound to make mistakes in life and hopefully learn from them. I think you need to step back and start focusing on yourself. If you can spend so much of your time and energy on someone else, you can most definitely do the same for yourself. Focus on your education and other important stuff that will lead Submit you to a successful future. questions to Focus on lovbit.ly/NOWAmy ing yourself. It is impossible to love someone else if you can’t even love yourself. You must stop looking for happiness in the same place you lost it. It doesn’t mean you will live the rest of your life alone. There are 7.53 billion and counting human beings on earth waiting to fall in love with someone who will meet their needs. But for right now focus on the power of stepping back in order to let yourself prosper and succeed in the future. Senior Amy Centes answers questions in a fun way. Take her advice for what it’s worth and make your own decisions, please.

Use power of stepping back to get over ex

Tortoise saving his species By Diane Bell The San Diego UnionTribune (TNS) SAN DIEGO — A giant tortoise from the San Diego Zoo has created his own Galapagos Islands following—literally. The love life of Diego, a playboy tortoise, has gained him a place in the national spotlight. On Sunday, CNN publicized the story of a “womanizing tortoise whose rampant sex life may have single-handedly saved his entire species from extinction.”

This offbeat news even diverted the attention of U.S. Rep. Scott Peters, a San Diego Democrat, from the issues of Iran and impeachment long enough for Peters to tweet his congratulations Sunday: “Thanks to this San Diegan, doing good for the world in his own way.” Diego came to the San Diego Zoo as a young adult in the early 1930s when several land tortoises from the Galapagos Islands were shipped to U.S. zoos, said Rick Schwartz, San Diego Zoo Global ambassador and spokesman. In the mid-1970s, though, a plea came from Galapagos wildlife officials spearheading a breeding program to save the area’s dwindling population of the gentle giants that weigh between 450 and 500 pounds as adults. So, the San Diego Zoo returned him in 1977. Ever since, Diego has been hard at work at a Galapagos National Parks service breeding center on Santa Cruz Island. Since the program started, he and the two remaining Espanola males and their offspring have boosted their subspecies population to more than 2,000. Diego was determined to be responsible for fathering 800 to 1,000 of them, or at least 40% of the entire population. 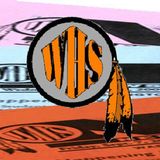