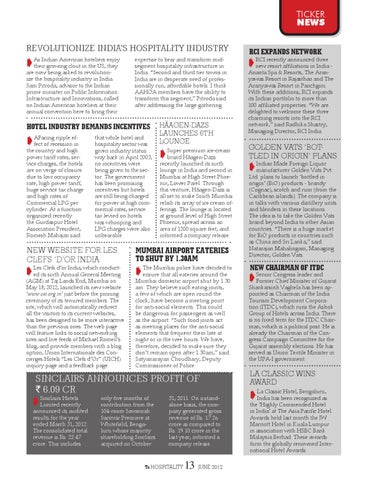 expertise to bear and transform midsegment hospitality infrastructure in India. “Second and third tier towns in India are in desperate need of professionally run, affordable hotels. I think AAHOA members have the ability to transform this segment,” Pitroda said after addressing the large gathering.

that while hotel and hospitality sector was given industry status way back in April 2003, no incentives were being given to the sector. The government has been promising incentives but hotels are still being charged for power at high commercial rates, service tax levied on hotels was whooping and LPG charges were also unbearable.

Super premium ice-cream brand Häagen-Dazs recently launched its sixth lounge in India and second in Mumbai at High Street Phoenix, Lower Parel. Through this venture, Häagen-Dazs is all set to make South Mumbai relish its array of ice cream offerings. The lounge is located at ground level of High Street Phoenix, spread across an area of 1200 square feet, and informed a company release.

Mumbai Airport Eateries to shut by 1.30am

Les Clefs d’or India, which conducted its sixth Annual General Meeting (AGM) at Taj Lands End, Mumbai on May 18, 2012, launched its new website ‘www.cai.org.in’ just before the pinning ceremony of its tenured members. The site, which will automatically redirect all the visitors to its current websites, has been designed to be more interactive than the previous ones. The web page will feature links to social networking sites and live feeds of Michael Romeil’s blog, and provide members with a blog option, Union Internationale des Concierges Hotels “Les Clefs d’Or” (UICH) inquiry page and a feedback page.

The Mumbai police have decided to ensure that all eateries around the Mumbai domestic airport shut by 1.30 am. They believe such eating joints, a few of which are open round the clock, have become a meeting point for anti-social elements. This could be dangerous for passengers as well as the airport. “Such food joints act as meeting places for the anti-social elements that frequent them late at night or in the wee hours. We have, therefore, decided to make sure they don’t remain open after 1.30am,” said Satyanarayan Choudhary, Deputy Commissioner of Police.

only five months of contribution from the 104-room Savannah Sarovar Premiere at Whitefield, Bengaluru whose majority shareholding Sinclairs acquired on October

RCI recently announced three new resort affiliations in India Ananta Spa & Resorts, The Aranyawas Resort in Rajasthan and The Aranyawas Resort in Panchgini. With these additions, RCI expands its Indian portfolio to more than 100 affiliated properties. “We are delighted to welcome these three charming resorts into the RCI network,” said Radhika Shastry, Managing Director, RCI India.

Indian Made Foreign Liquor manufacturer Golden Vats Pvt. Ltd. plans to launch ‘bottled in origin’ (BiO) products - brandy (Cognac), scotch and rum (from the Caribbean islands). The company is in talks with various distillery units and blenders in these locations. The idea is to take the Golden Vats brand beyond India to other Asian countries. “There is a huge market for BiO products in countries such as China and Sri Lanka,” said Natarajan Mahalingam, Managing Director, Golden Vats.

Senior Congress leader and Former Chief Minister of Gujarat Shankarsinh Vaghela has been appointed as Chairman of the India Tourism Development Corporation (ITDC), which runs the Ashok Group of Hotels across India. There is no fixed term for the ITDC Chairman, which is a political post. He is already the Chairman of the Congress Campaign Committee for the Gujarat assembly elections. He has served as Union Textile Minister in the UPA-I government.