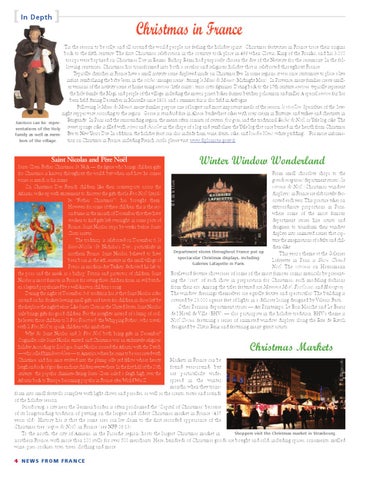 'Tis the season to be jolly, and all around the world people are feeling the holiday spirit. Christmas festivities in France trace their origins back to the fifth century. The first Christmas celebration in the country took place in 496 when Clovis, King of the Franks, and his 3,000 troops were baptized on Christmas Day in Reims. Bishop Rémi had purposely chosen the day of the Nativity for the ceremony. In the following centuries, Christmas has transformed into both a secular and religious holiday that is celebrated throughout France. Typically, churches in France have a small nativity scene displayed inside on Christmas Eve. In some regions, it was once customary to place a live infant, symbolizing the baby Jesus, in the crèche (manger scene) during la Messe de Minuit (Midnight Mass). In Provence, many families create smaller versions of the nativity scene at home using santons (little saints), terra cotta figurines. Dating back to the 17th century, santons typically represent the holy family, the Magi, and people of the village, including the mayor, priest, baker, farmer, butcher, policeman and miller. A special santon fair has been held during December in Marseille since 1803, and a summer fair is also held in Aubagne. Following la Messe de Minuit, many families prepare one of largest and most important meals of the season, le réveillon. Specialties of the latenight supper vary according to the region. Goose is standard fare in Alsace, buckwheat cakes with sour cream in Brittany, and turkey and chestnuts in Burgundy. In Paris and the surrounding region, the menu often consists of oysters, foie gras, and the traditional Bûche de Noël, or Yule log cake. The Santons can be represweet sponge cake is filled with crème and chocolat in the shape of a log and symbolizes the Yule log that once burned in the hearth from Christmas sentations of the Holy family as well as mem- Eve to New Year's Day. In addition, the holiday feast can also include ham, wine, fruits, cake, and boudin blanc (white pudding). For more information on Christmas in France, including French carols, please visit: www.diplomatie.gouv.fr. bers of the village.

From small chocolate shops to the grands magasins (department stores),les vitrines de Noël (Christmas window displays) in France are elaborately decorated each year. This practice takes on extraordinary proportions in Paris, where some of the most famous department stores hire artists and designers to transform their window displays into animated scenes that capture the imaginations of adults and children alike. Department stores throughout France put up This year's theme at the Galeries spectacular Christmas displays, including Lafayette in Paris is Show Chaud Galeries Lafayette in Paris. Noël. The vitrines on Haussmann Boulevard feature showcases of some of the most famous comic musicals by presenting the "cast" of each show in preparation for Christmas, each modeling fashions from their era. Among the titles featured are Mamma Mia!, Footloose, and Hairspray. The window dressings themselves are equally festive and spectacular. The building is covered by 23,000 square feet of lights in a delicate lacing designed by Valerio Festi. Other Parisian department stores — Au Printemps, Le Bon Marché and Le Bazar de l'Hotel de Ville (BHV) — also participate in the holiday tradition. BHV’s theme is Noël Circus, featuring a series of animated window displays along the Rue de Rivoli designed by Olivia Ruiz and featuring many guest artists. © F. de la Mure

Santa Claus, Father Christmas, St. Nick — the figure who brings children gifts for Christmas is known throughout the world, but when and how he comes varies as much as his name. On Christmas Day, French children, like their counterparts across the Atlantic, wake up with excitement to discover the gifts that le Père Noël (literally, “Father Christmas”) has brought them. However, for some of these children, this is the second time in the month of December that they have awoken to find gifts left overnight: in some parts of France, Saint Nicolas stops by weeks before Santa Claus arrives. The tradition is celebrated on December 6, la Saint-Nicolas (St. Nicholas's Day), particularly in northern France. Saint Nicolas, believed to have been born in the 4th century in the small village of Patara in modern-day Turkey, dedicated his life to the poor and the meek as a bishop. Patron and protector of children, Saint Nicolas is most famous in France for saving three children from an evil butcher, a legend popularized by a well-known children's song. During the night of December 5-6, tradition has it that Saint Nicolas rides around on his donkey, leaving small gifts and treats for children in shoes left by the fireplace the night before.Like Santa Claus in the United States,Saint Nicolas only brings gifts for good children. For the naughty, instead of a lump of coal, he leaves those children to le Père Fouettard (the Whipping Father), who travels with le Père Noël to spank children who misbehave. Why do Saint Nicolas and le Père Noël both bring gifts in December? Originally, only Saint Nicolas existed, and Christmas was an exclusively religious holiday.According to Lexilogos, Saint Nicolas crossed the Atlantic with the Dutch — who called him Sinterklaas— to America,where he came to be associated with Christmas and has since evolved into the plump jolly red fellow whose hearty laugh and sack of goodies enchant children everywhere.In the first half of the 20th century, the popular chimney-diving Santa Claus sailed a sleigh high over the Atlantic back to Europe, becoming popular in France after World War II.

Markets in France can be found year-round, but are particularly widespread in the winter months, when they transform into small festivals complete with light shows and parades, as well as the scents, tastes and sounds of the holiday season. Strasbourg, a city near the German border, is often proclaimed the "Capital of Christmas" because of its longstanding tradition of putting on the largest and oldest Christmas market in France (437 years old). History has it that the same area can lay claim to the first recorded appearance of the Christmas tree (sapin de Noël) in France (see NFF 06.13). Shoppers visit the Christmas market in Strasbourg. To the north, the city of Amiens, in the Picardie region, hosts the largest Christmas market in northern France, with more than 100 stalls for over 500 merchants. Here, hundreds of Christmas goods are bought and sold, including spices, ornaments, mulled wine, pies, cookies, toys, trees, clothing and more. 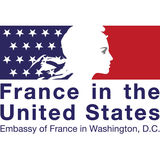 News From France is a free, triweekly review of news and trends in France published by the Press and Communication Office of the Embassy of...

News From France is a free, triweekly review of news and trends in France published by the Press and Communication Office of the Embassy of...