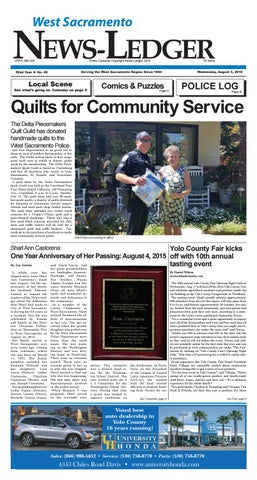 Serving the West Sacramento Region Since 1964

and Fire Departments to be given out to those in need of comfort during police or fire calls. The Guild selects three to four recipients each year to which to donate quilts made by the membership. The Delta Piecemakers Quilt Guild is based in Clarksburg and has 40 members who reside in Yolo, Sacramento, El Dorado, and Stanislaus Counties. A quilt show by the Delta Piecemakers Quilt Guild was held at the Courtland Pear Fair, Bates School Cafeteria, 180 Primasing Ave., Courtland, 9 a.m. to 5 p.m., Sunday, July 31. The quilt show had over 50 member-made quilts, a display of quilts destined for donation to community service organizations and local quilt shop vendor booths. The quilt show included two visitor voted contests for a People’s Choice quilt and a pear-themed challenge. There was also a free quilt block coloring activities for children and raffle tickets will be sold for a showcased quilt and raffle baskets. Proceeds go to the purchase of products to make more community service quilts.

Yolo County Fair kicks One Year Anniversary of Her Passing: August 4, 2015 off with 10th annual and Alicia Luera. And tasting event By Jan Dalske her great grandchildren Sharl Ann Castorena:

A whole year has slipped away since Sharl Ann Castorena’s death last August. On the anniversary of her death, her husband, Edward, wanted to remind the readers of the News-Ledger about the difference that Sharl had made to City of West Sacramento during her 63 years as a resident. Her life was celebrated by friends and family at the Horizon Christian Fellowship on Manzanita Way in West Sacramento on August 12, 2015. Her family moved to West Sacramento over sixty years ago, coming from Arkansas, where she was born on March 11, 1951. Her family members included her husband, Edward, and her daughters, Lora Luera (Robert), Amber Castorena, Chaylena Castorena (Brent), and son, Joseph Castorena. Her granddaughters are Lydia Tupasi (Jeremy), Jessica Lovato (Daisy), Michelle Garcia (Juan),

are Analeigha, Jasmine, Marleigh, and Justin. Her brother, Wayne Adams (Linda) and her sister Dorothy Blaylock (Don) all miss Sharl’s smile and wonderful attitude and dedication to her community. As a member of the Latino Community in West Sacramento, Sharl noticed firsthand the effects of discrimination in her city. She got involved when her granddaughter was pulled over by the West Sacramento Police Department more times than she could count. She was working in the Washington District and was driving home to Broderick. There were no citations issued. There were no reasons given to her as to why she was stopped. Sharl needed to find out why this was happening. She felt that there was discrimination involved in the police action. When Measure V was proposed, Sharl served on the oversight com-

the bathrooms in Bryte Park. As the President of the League of United Latin American Citizens (LULAC) she worked with the local elected officials to acquire funding from Disney for im-

The 10th annual Yolo County Fair Opening Night Gala on Wednesday, Aug. 17 will kick off the 2016 Yolo County Fair and celebrate agriculture products and produce inside the Ag Building at the Yolo County Fairgrounds in Woodland. The tasting event, which usually attracts approximately 600 attendees from all over the region, will take place from 6 to 8 p.m. and feature approximately 36 vendors, live music, leaders from the local community, previous guests and presenters from past fairs and more, according to a statement by the Gala’s event coordinator Samantha Novan. “It’s a wonderful event and a great opportunity to experience all of the local produce and wine and beer and olive oil that’s produced here in Yolo County that you might not experience anywhere else under the same roof,” said Novan. Tickets run $20 in advance and $25 at the door, but the event’s organizers urge attendees to buy their tickets early as they tend to sell out before the event. Novan said tickets are available online for the first time this year and can be purchased at www.yolocountyfair.net under “The Fair” section by clicking on “Yolo County Fair’s Opening Night Gala.” Note that a $3 processing fee is added to online ticket purchases. Event organizers like Yolo County Fair Board President Katie Villegas are especially excited about community members being able to get a taste of local products. “It’s the best event in Yolo County!” said Villegas. “Showcasing all of our locally-grown produce and locally-made craft beers, wines, cheeses and olive oils – it’s a delicious experience for the whole family!” Two local bands, Chicken & Dumpling and Clarence Van Hook & Friends, are back this year to perform live blues