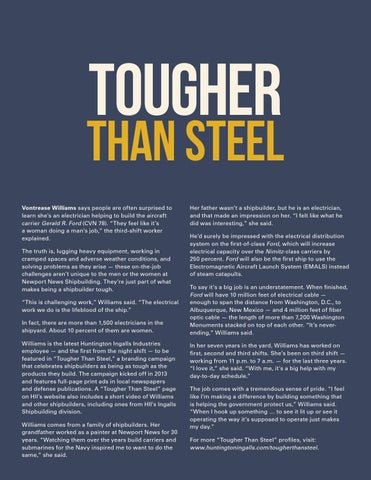 Than Steel Vontrease Williams says people are often surprised to learn she’s an electrician helping to build the aircraft carrier Gerald R. Ford (CVN 78). “They feel like it’s a woman doing a man’s job,” the third-shift worker explained. The truth is, lugging heavy equipment, working in cramped spaces and adverse weather conditions, and solving problems as they arise — these on-the-job challenges aren’t unique to the men or the women at Newport News Shipbuilding. They’re just part of what makes being a shipbuilder tough. “This is challenging work,” Williams said. “The electrical work we do is the lifeblood of the ship.” In fact, there are more than 1,500 electricians in the shipyard. About 10 percent of them are women. Williams is the latest Huntington Ingalls Industries employee — and the first from the night shift — to be featured in “Tougher Than Steel,” a branding campaign that celebrates shipbuilders as being as tough as the products they build. The campaign kicked off in 2013 and features full-page print ads in local newspapers and defense publications. A “Tougher Than Steel” page on HII’s website also includes a short video of Williams and other shipbuilders, including ones from HII’s Ingalls Shipbuilding division. Williams comes from a family of shipbuilders. Her grandfather worked as a painter at Newport News for 30 years. “Watching them over the years build carriers and submarines for the Navy inspired me to want to do the same,” she said.

Her father wasn’t a shipbuilder, but he is an electrician, and that made an impression on her. “I felt like what he did was interesting,” she said. He’d surely be impressed with the electrical distribution system on the first-of-class Ford, which will increase electrical capacity over the Nimitz-class carriers by 250 percent. Ford will also be the first ship to use the Electromagnetic Aircraft Launch System (EMALS) instead of steam catapults. To say it’s a big job is an understatement. When finished, Ford will have 10 million feet of electrical cable — enough to span the distance from Washington, D.C., to Albuquerque, New Mexico — and 4 million feet of fiber optic cable — the length of more than 7,200 Washington Monuments stacked on top of each other. “It’s neverending,” Williams said. In her seven years in the yard, Williams has worked on first, second and third shifts. She’s been on third shift — working from 11 p.m. to 7 a.m. — for the last three years. “I love it,” she said. “With me, it’s a big help with my day-to-day schedule.” The job comes with a tremendous sense of pride. “I feel like I’m making a difference by building something that is helping the government protect us,” Williams said. “When I hook up something … to see it lit up or see it operating the way it’s supposed to operate just makes my day.” For more “Tougher Than Steel” profiles, visit: www.huntingtoningalls.com/tougherthansteel.