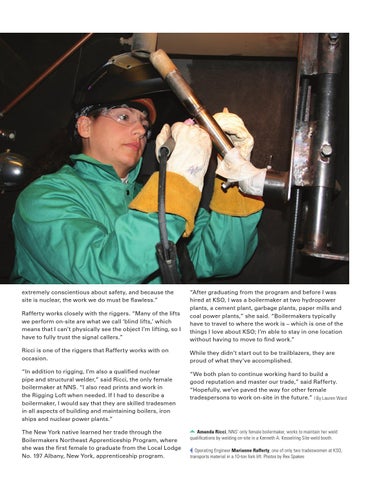 extremely conscientious about safety, and because the site is nuclear, the work we do must be flawless.” Rafferty works closely with the riggers. “Many of the lifts we perform on-site are what we call ‘blind lifts,’ which means that I can’t physically see the object I’m lifting, so I have to fully trust the signal callers.”

“After graduating from the program and before I was hired at KSO, I was a boilermaker at two hydropower plants, a cement plant, garbage plants, paper mills and coal power plants,” she said. “Boilermakers typically have to travel to where the work is – which is one of the things I love about KSO; I’m able to stay in one location without having to move to find work.”

Ricci is one of the riggers that Rafferty works with on occasion.

While they didn’t start out to be trailblazers, they are proud of what they’ve accomplished.

“In addition to rigging, I’m also a qualified nuclear pipe and structural welder,” said Ricci, the only female boilermaker at NNS. “I also read prints and work in the Rigging Loft when needed. If I had to describe a boilermaker, I would say that they are skilled tradesmen in all aspects of building and maintaining boilers, iron ships and nuclear power plants.”

“We both plan to continue working hard to build a good reputation and master our trade,” said Rafferty. “Hopefully, we’ve paved the way for other female tradespersons to work on-site in the future.” I By Lauren Ward

The New York native learned her trade through the Boilermakers Northeast Apprenticeship Program, where she was the first female to graduate from the Local Lodge No. 197 Albany, New York, apprenticeship program.

Amanda Ricci, NNS’ only female boilermaker, works to maintain her weld qualifications by welding on-site in a Kenneth A. Kesselring Site weld booth. Operating Engineer Marianne Rafferty, one of only two tradeswomen at KSO, transports material in a 10-ton fork lift. Photos by Rex Spakes