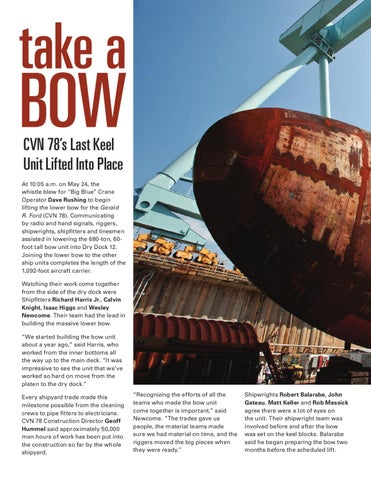 At 10:05 a.m. on May 24, the whistle blew for “Big Blue” Crane Operator Dave Rushing to begin lifting the lower bow for the Gerald R. Ford (CVN 78). Communicating by radio and hand signals, riggers, shipwrights, shipﬁtters and linesmen assisted in lowering the 680-ton, 60foot tall bow unit into Dry Dock 12. Joining the lower bow to the other ship units completes the length of the 1,092-foot aircraft carrier. Watching their work come together from the side of the dry dock were Shipﬁtters Richard Harris Jr., Calvin Knight, Isaac Higgs and Wesley Newcome. Their team had the lead in building the massive lower bow. “We started building the bow unit about a year ago,” said Harris, who worked from the inner bottoms all the way up to the main deck. “It was impressive to see the unit that we’ve worked so hard on move from the platen to the dry dock.” Every shipyard trade made this milestone possible from the cleaning crews to pipe ﬁtters to electricians. CVN 78 Construction Director Geoff Hummel said approximately 50,000 man hours of work has been put into the construction so far by the whole shipyard.

“Recognizing the efforts of all the teams who made the bow unit come together is important,” said Newcome. “The trades gave us people, the material teams made sure we had material on time, and the riggers moved the big pieces when they were ready.”

Shipwrights Robert Balarabe, John Gateau, Matt Keller and Rob Messick agree there were a lot of eyes on the unit. Their shipwright team was involved before and after the bow was set on the keel blocks. Balarabe said he began preparing the bow two months before the scheduled lift. 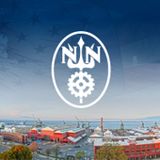