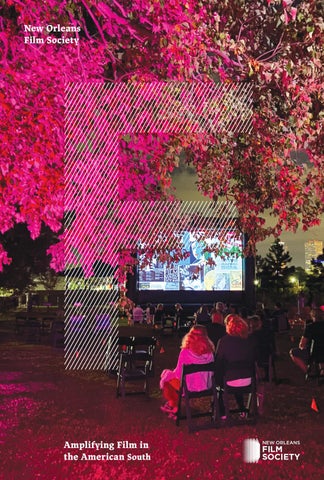 Amplifying Film in the American South

The New Orleans Film Society (NOFS) discovers, cultivates, and amplifies diverse voices of filmmakers who tell the stories of our time. We produce the Oscar®-qualifying New Orleans Film Festival annually and invest year-round in building a vibrant film culture in the South to share transformative cinematic experiences with audiences and connect dynamic filmmakers to career-advancing resources.

The Emerging Voices Mentorship Program, a filmmaker support initiative of the New Orleans Film Society, was created in 2014 for filmmakers of color in Louisiana to gain greater access to gatekeepers and to promote the unique perspectives and cultures of Louisiana to the rest of the country, and the world.

The Southern Producers Lab, produced and presented by the New Orleans Film Society, is a program designed to bring together an annual cohort of emerging, diverse producers from around the South for an intensive series of workshops, panels, oneon-one mentoring sessions, and community-building opportunities over the course of three convenings throughout the year.

South Summit, part of NOFS’s suite of filmmaker development programs, is a convening of local, regional, and national media makers, arts funders, and institutional stakeholders, with the intent of seeding conversations and actions around creating, resourcing, and amplifying film and media content that shapes how the U.S. sees the South and how the South sees itself.

South Pitch is the New Orleans Film Festival’s pitch competition platform. Since 2011, South Pitch has provided a unique opportunity for filmmakers living and working in the American South to pitch project ideas or works-in-progress to a panel of industry experts for valuable, constructive feedback, with winning pitches selected for funding and awards. South Pitch comprises three pitching competitions: one for documentary projects (hosted in partnership with IF/Then for four years); Narrative Pitch; and Student Pitch, which engages university-level film students from film schools in the American South.

The NOFS Filmmaker Conference is a series of artist-focused panels, talks, and workshops that takes place annually during NOFF. This programming serves as both a space for creative and professional development for participating filmmakers, as well as a series of provocations around the state of filmmaking from theory to practice. This event is free to all attendees.

Who We Are The New Orleans Film Society is a New Orleans-based 501(c)3 with eight full-time staff and, on average, 60+ seasonal staff and contractors. Your support helps grow a vibrant film culture in our community through our festivals, year-round programming, film screenings, and filmmaker development programs. We help develop and sustain Southern filmmakers and filmmakers from traditionally marginalized communities by connecting them with industry stakeholders, creating safe and open spaces for filmmakers to collaborate and critically consider important issues in today’s film landscape. We also provide mentoring through workshops, roundtables, conferences, and educational labs. Join the New Orleans Film Society today and help ensure a dynamic, Southern film landscape for the future.

Become a Member Membership in NOFS is a great way to get involved and learn more about Southern film. There are a variety of membership levels to suit all interests. When you support the New Orleans Film Society, you play a large role in discovering, cultivating, and amplifying the diverse voices of filmmakers who tell the stories of the region through our festivals and filmmaker development programs.

MEMBERSHIP LEVELS AND BENEFITS All memberships are tax deductible to the amount allowable by law.

Passes, good for all screenings

(exclusively for the Circle) to the

NOFF and the FFF, good for one

Tickets (good for either in-person

festival cycle and includes all outdoor

or virtual screenings) with advance

exclusive to the Circle, and more!

screenings (one during each festival).

• Director’s Circle Dinner: Invitation for (2) to an exclusive dinner with filmmaking talent as guest of honor. • Passes &amp; Patron Parties: (4) All Access Passes–– so you can bring along your friends–– with reserved seating (exclusively for the Circle) to NOFF and FFF, good for one festival cycle, and includes all outdoor and virtual screening events,

FFF program highlights, on screen, in

• Plus advance booking and access, discounts, and member events!

talent conversations, patron parties exclusive to the Circle, and more! • Recognition: 2 names of individuals (or one business name) in NOFF and FFF program highlights, on screen, in every newsletter, and on our

website. • Gala: 2 Patron Tickets to the annual spring Gala OR the option to upgrade to a table with an additional contribution.

an invite to our virtual Meet-the-

get film recommendations and

• All benefits at the Director’s Circle

level plus two additional invites to the Director’s Circle Dinner (total of 4) and a full table (seats 8) at the annual spring Gala.

sell out during our festivals. Receive

• Plus all the benefits of the Producer’s

• Plus all the benefits of the Take Two

(or one business name) in NOFF and

insights. • Discounts: Receive member discounts on tickets, passes, packages, events, and merchandise throughout the year. With discounts of up to $30 on select festival passes at NOFF, this membership level nearly pays for itself! • Member Events: Free member sneak-previews throughout the year; receive emails for member events!

NOFS by the Numbers

pitches presented by student and emerging, Southern filmmakers to industry professionals since 2011

Louisiana-made films represented in the lineup

Women and gendernonconforming directors represented in the lineup

Directors of color represented in the lineup

“ The NOFF continues to get better each year. It was WONDERFUL to be able to stream the films from the comfort (and safety) of home. I am looking forward to when we can attend in the theaters. NOFS did a SUPER job in pulling this off in the pandemic!” – NOFF2020 Audience Member

NOFF ON SOCIAL MEDIA “ The Open-Air Cinema was such an experience with set lighting and seating really making it feel like a theater. Loved watching the pre-recorded Q&amp;A videos with filmmakers after each film, very informative. Excellent work!”

“ The New Orleans Film Society went above and beyond creating an incredible (and safe) festival even in the midst of a pandemic. The virtual screenings made it so easy to access so many amazing films and I was grateful to have my film screen online as well as at their Open Air Cinemas in New Orleans. Thanks NOFS and can’t wait for NOFF 2021!” – Director Stuart Sox (To Decadence With Love, Thanks for Everything!), NOFF2020

“ The Emerging Voices program helped me surround myself with a strong community of mentors and filmmaking comrades. This community would guide me and support me every step of the way in making my first feature film: Ma Belle, My Beauty. To come full circle with the project and have our Sundance world premiere hosted by NOFS in New Orleans was like bringing my work home to my family.” Marion Hill is a New Orleans-based director with roots in Vietnam, England, and France. Her direction of the camera is devoted to the nuances of femme power, queer sensibility, and radical sensuality across cultures. With deep love for music, visual storytelling, and cultural fusion, Hill has specialized in grassroots and small-scale productions, collaborating with folks around the world to deliver authentic cinematic stories in all forms. Hill’s debut feature film, Ma Belle, My Beauty had its World Premiere at the 2021 Sundance Film Festival and won the Audience Award in the NEXT category.

“ My film career started with NOFS, who supported and programmed my work from my early years as a maker. Years later, when baby me decided to direct a feature doc, NOFS encouraged and mentored me through the EV program. They have always gone above and beyond to foster the film talent in New Orleans, and for that I’m forever grateful and so excited for what lies ahead.” Zac Manuel is an award–winning, New Orleans bred-and-based filmmaker, and the son of a touring jazz musician and a community builder at the Department of Housing and Urban Development. His work in documentary and music video explores intimacy, Black masculinity, class, identity and inheritance. His cinematography and directing credits include TIME (Oscar 2021 Nominee for Best Documentary), ALONE (NYT Op-Doc; Sundance 2017 Jury Award Winner – Best Non-Fiction Film), BUCKJUMPING (NOFF2018, Winner Best Cinematography), THE EARTH IS HUMMING (SXSW 2018), AMERICA (Sundance 2019 Jury Award Winner), THE CUT (NOFF, True/False 2021), and THIS BODY (PBS broadcast 2021).

“ Over the last 4 years I’ve been honored to be engaged with the programming and filmmaker resources made available through the New Orleans Film Festival and New Orleans Film Society. Being able to connect with the network of Southern filmmakers and producers, show my work, and advance projects has made a huge impact on my career in a short time. The Southern Producers Lab has been a source of creative mentoring and friendships, and was as motivating as it was enlightening. I have enormous gratitude to the NOFS team and all they do to make Southern storytelling shine in the wider film industry.” Pilar Timpane is a filmmaker and creative producer living in Durham, NC. Her work has focused on women’s stories, immigration, and religious communities with the aim of using storytelling for social change. She co-directed and produced SANTUARIO (2019, PBS/ ReelSouth &amp; AlJazeera Witness). SANTUARIO was the winner of the Best Documentary Short Jury Prize at New Orleans Film Festival 2018 as well as the Crested Butte ActNow Award and the IF/Then Shorts American South Pitch in 2017.

The New Orleans Film Society (NOFS) discovers, cultivates, and amplifies diverse voices of filmmakers who tell the stories of our time. We produce the Oscar®-qualifying New Orleans Film Festival annually and invest year-round in building a vibrant film culture in the South to share transformative cinematic experiences with audiences, and connect dynamic filmmakers to career-advancing resources. Explore NOFS programs and insights in this brochure and visit https://neworleansfilmsociety.org to join us as a member!