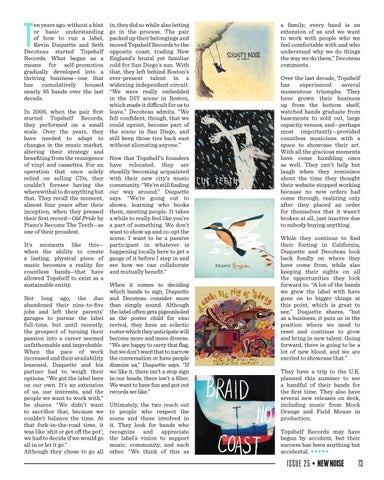 en years ago, without a hint or basic understanding of how to run a label, Kevin Duquette and Seth Decoteau started Topshelf Records. What began as a means for self-promotion gradually developed into a thriving business—one that has cumulatively housed nearly 95 bands over the last decade. In 2006, when the pair first started Topshelf Records, they performed on a small scale. Over the years, they have needed to adapt to changes in the music market, altering their strategy and benefiting from the resurgence of vinyl and cassettes. For an operation that once solely relied on selling CDs, they couldn’t foresee having the wherewithal to do anything but that. They recall the moment, almost four years after their inception, when they pressed their first record—Old Pride by Piano’s Become The Teeth—as one of their proudest. It’s moments like this— when the ability to create a lasting, physical piece of music becomes a reality for countless bands—that have allowed Topshelf to exist as a sustainable entity. Not long ago, the duo abandoned their nine-to-five jobs and left their parents’ garages to pursue the label full-time, but until recently, the prospect of turning their passion into a career seemed unfathomable and improbable. When the pace of work increased and their availability lessened, Duquette and his partner had to weigh their options. “We got the label here on our own. It’s an extension of us, our interests, and the people we want to work with,” he shares. “We didn’t want to sacrifice that, because we couldn’t balance the time. At that fork-in-the-road time, it was like ‘shit or get off the pot’; we had to decide if we would go all in or let it go.” Although they chose to go all

in, they did so while also letting go in the process. The pair packed up their belongings and moved Topshelf Records to the opposite coast, trading New England’s brutal yet familiar cold for San Diego’s sun. With that, they left behind Boston’s ever-present talent in a widening independent circuit. “We were really embedded in the DIY scene in Boston, which made it difficult for us to leave,” Decoteau admits. “We felt confident, though, that we could uproot, become part of the scene in San Diego, and still keep those ties back east without alienating anyone.” Now that Topshelf ’s founders have relocated, they are steadily becoming acquainted with their new city’s music community. “We’re still finding our way around,” Duquette says. “We’re going out to shows, learning who books them, meeting people. It takes a while to really feel like you’re a part of something. We don’t want to show up and co-opt the scene. I want to be a passive participant in whatever is happening locally here to get a gauge of it before I step in and see how we can collaborate and mutually benefit.” When it comes to deciding which bands to sign, Duquette and Decoteau consider more than simply sound. Although the label often gets pigeonholed as the poster child for emo revival, they have an eclectic roster which they anticipate will become more and more diverse. “We are happy to carry that flag, but we don’t want that to narrow the conversation or have people dismiss us,” Duquette says. “If we like it, there isn’t a stop sign in our heads, there isn’t a filter. We want to have fun and put out records we like.” Ultimately, the two reach out to people who respect the scene and those involved in it. They look for bands who recognize and appreciate the label’s vision to support music, community, and each other. “We think of this as

a family; every band is an extension of us and we want to work with people who we feel comfortable with and who understand why we do things the way we do them,” Decoteau comments. Over the last decade, Topshelf has experienced several momentous triumphs. They have grown their business up from the bottom shelf, watched bands graduate from basements to sold out, large capacity venues, and—perhaps most importantly—provided countless musicians with a space to showcase their art. With all the gracious moments have come humbling ones as well. They can’t help but laugh when they reminisce about the time they thought their website stopped working because no new orders had come through, realizing only after they placed an order for themselves that it wasn’t broken at all, just inactive due to nobody buying anything. While they continue to find their footing in California, Duquette and Decoteau look back fondly on where they have come from, while also keeping their sights on all the opportunities they look forward to. “A lot of the bands we grew the label with have gone on to bigger things at this point, which is great to see,” Duquette shares, “but as a business, it puts us in the position where we need to reset and continue to grow and bring in new talent. Going forward, there is going to be a lot of new blood, and we are excited to showcase that.” They have a trip to the U.K. planned this summer to see a handful of their bands for the first time. They also have several new releases on deck, including music from Mock Orange and Field Mouse in production. Topshelf Records may have begun by accident, but their success has been anything but accidental. 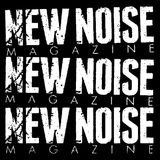