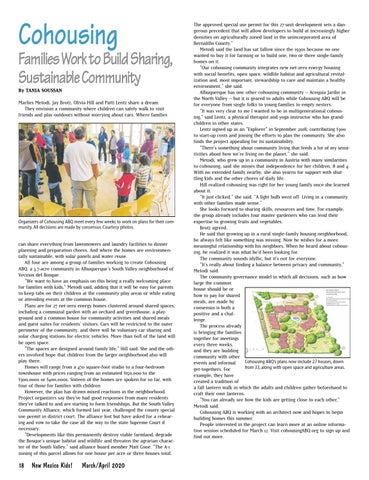 Marlies Metodi, Jay Brotz, Olivia Hill and Patti Lentz share a dream. They envision a community where children can safely walk to visit friends and play outdoors without worrying about cars. Where families

Organizers of Cohousing ABQ meet every few weeks to work on plans for their community. All decisions are made by consensus. Courtesy photos.

can share everything from lawnmowers and laundry facilities to dinner planning and preparation chores. And where the homes are environmentally sustainable, with solar panels and water reuse. All four are among a group of families working to create Cohousing ABQ, a 3.7-acre community in Albuquerque’s South Valley neighborhood of Vecinos del Bosque. "We want to have an emphasis on this being a really welcoming place for families with kids," Metodi said, adding that it will be easy for parents to keep tabs on their children at the community play areas or while eating or attending events at the common house. Plans are for 27 net-zero energy homes clustered around shared spaces, including a communal garden with an orchard and greenhouse, a playground and a common house for community activities and shared meals and guest suites for residents’ visitors. Cars will be restricted to the outer perimeter of the community, and there will be voluntary car sharing and solar charging stations for electric vehicles. More than 60% of the land will be open space. "The spaces are designed around family life," Hill said. She and the others involved hope that children from the larger neighborhood also will play there. Homes will range from a 470 square-foot studio to a four-bedroom townhouse with prices ranging from an estimated $150,000 to the $300,000s or $400,000s. Sixteen of the homes are spoken for so far, with four of those for families with children. However, the plan has drawn mixed reactions in the neighborhood. Project organizers say they’ve had good responses from many residents they’ve talked to and are starting to form friendships. But the South Valley Community Alliance, which formed last year, challenged the county special use permit in district court. The alliance lost but have asked for a rehearing and vow to take the case all the way to the state Supreme Court if necessary. “Developments like this permanently destroy viable farmland, degrade the Bosque’s unique habitat and wildlife and threaten the agrarian character of the South Valley,” said alliance board member Matt Cone. “The A-1 zoning of this parcel allows for one house per acre or three houses total.

The approved special use permit for this 27-unit development sets a dangerous precedent that will allow developers to build at increasingly higher densities on agriculturally zoned land in the unincorporated area of Bernalillo County.” Metodi said the land has sat fallow since the 1930s because no one wanted to buy it for farming or to build one, two or three single-family homes on it. “Our cohousing community integrates new net-zero energy housing with social benefits, open space, wildlife habitat and agricultural revitalization and, most important, stewardship to care and maintain a healthy environment,” she said. Albuquerque has one other cohousing community – Acequia Jardin in the North Valley – but it is geared to adults while Cohousing ABQ will be for everyone from single folks to young families to empty nesters. “It was very clear to me I wanted to be in multigenerational cohousing,” said Lentz, a physical therapist and yoga instructor who has grandchildren in other states. Lentz signed up as an “Explorer” in September 2018, contributing $300 to start-up costs and joining the efforts to plan the community. She also finds the project appealing for its sustainability. “There’s something about community living that feeds a lot of my sensitivities about how we’re living on the planet,” she said. Metodi, who grew up in a community in Austria with many similarities to cohousing, said she misses that independence for her children, 8 and 4. With no extended family nearby, she also yearns for support with shuttling kids and the other chores of daily life. Hill realized cohousing was right for her young family once she learned about it. "It just clicked," she said. "A light bulb went off. Living in a community with other families made sense." She looks forward to sharing skills, resources and time. For example, the group already includes four master gardeners who can lend their expertise to growing fruits and vegetables. Brotz agreed. He said that growing up in a rural single-family housing neighborhood, he always felt like something was missing. Now he wishes for a more meaningful relationship with his neighbors. When he heard about cohousing, he realized it was what he'd been looking for. The community sounds idyllic, but it’s not for everyone. "It's really about finding a balance between privacy and community," Metodi said. The community governance model in which all decisions, such as how large the common house should be or how to pay for shared meals, are made by consensus is both a positive and a challenge. The process already is bringing the families together for meetings every three weeks, and they are building community with other Cohousing ABQ’s plans now include 27 houses, down events and informal from 33, along with open space and agriculture areas. get-togethers. For example, they have created a tradition of a fall lantern walk in which the adults and children gather beforehand to craft their own lanterns. "You can already see how the kids are getting close to each other,” Metodi said. Cohousing ABQ is working with an architect now and hopes to begin building homes this summer. People interested in the project can learn more at an online information session scheduled for March 12. Visit cohousingABQ.org to sign up and find out more.