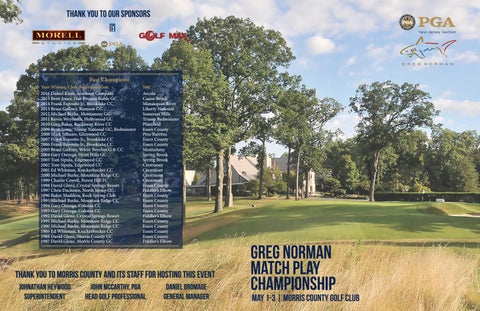 thank you to our sponsors

“The membership take pride in hosting events,” John McCarthy, head professional at Morris County said. McCarthy has already played well this season. The 42-year-old was a runner-up in last week’s Cutter and Buck Head Professional Championship at Alpine Country Club. His assistant, Craig Smith, was a quarterfinalist at the Match Play Championship last year. Though the course measures to around 6,500 yards, McCarthy says its length can be deceiving, with blind tee shots on nearly every hole. During the offseason, its 9th hole was renovated, extending its back tee to play as a par-4 or 5. “It’s really a shot-maker’s course, McCarthy said. “It’s very rare to find a flat lie. You want to pick and choose where you’re landing your shots and kind of map out a plan like billiards. You’re playing pool and setting the shot up by hand, but you’re also preparing for the next shot. You definitely want to think about what you’re doing. It’s kind of called a thinking man’s course the way Seth Raynor

Kinn is coming off a season where he finished No. 2 in the OMEGA Player of the Year standings. He was also apart of the first team to defeat the Philadelphia Section in the Turnpike Cup last October.

designed it.” One of the most difficult holes on the course is the par-4 7th, nicknamed “Big Ben,” which ranges from 450-475 yards. If you miss your approach shot to the punch bowl green, you may find yourself in a difficult situation in one of the surrounding bunkers. “It has a lot of hill to it,” McCarthy said. “Last year, they renovated the [7th] hole to put it back to its original punch bowl design. It’s kind of a risk reward. You can hit an iron off the top plateau, or have a mid-to-long iron in to utilize to the punch bowl.” McCarthy says taking advantage of the first five holes may be key to holding the advantage throughout the match. “As you go six through 10 and 13 to 18, you’re kind of trying to just score par,” he said. This is the first time Morris County has hosted a major event since the Fall Finale from 1996-1998. “It’s just a fun golf course to host an event,” McCarthy said. “With the clubhouse getting renovated, it’s going in a great direction.”

The former Professional Golf Management student from Clemson University said the biggest thing this season is changing his mentality and expectations.

ity Clambake, and a tie for third in the New Jersey PGA Championship, qualifying for the PGA Professional Championship in June at Crosswater and Meadows Courses at Sunriver Resort in Sunriver, Oregon. “I’d be lying if I didn’t say I had huge expectations,” Kinn said. “[Winning the Match Play Championship] definitely boosted my confidence that I can compete with these guys. It really got my year rolling.”

“I plan on finishing at the top, I plan on finishing events,” he said. “I have that confidence at this point that wasn’t there last year.” Kinn, who hits the ball long, will play Damien Hamlett of Galloping Hill in his first round match. As of last month, Kinn has yet to play Morris County Golf Club. “I hear it’s a course you got to get some practice rounds in,” Kinn said. “I hear it’s a little short, which isn’t an ideal, but I’m looking forward to big things this year.”