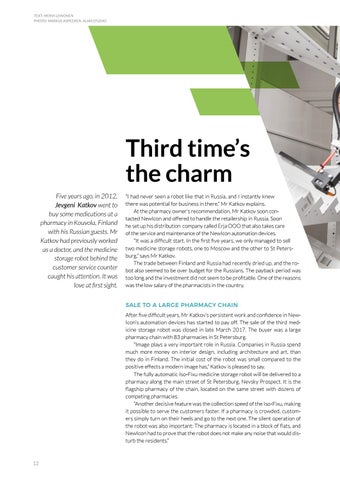 Third time’s the charm Five years ago, in 2012, Jevgeni Katkov went to buy some medications at a pharmacy in Kouvola, Finland with his Russian guests. Mr Katkov had previously worked as a doctor, and the medicine storage robot behind the customer service counter caught his attention. It was love at first sight.

“I had never seen a robot like that in Russia, and I instantly knew there was potential for business in there,” Mr Katkov explains. At the pharmacy owner’s recommendation, Mr Katkov soon contacted NewIcon and offered to handle the retailership in Russia. Soon he set up his distribution company called Erja OOO that also takes care of the service and maintenance of the NewIcon automation devices. “It was a difficult start. In the first five years, we only managed to sell two medicine storage robots, one to Moscow and the other to St Petersburg,” says Mr Katkov. The trade between Finland and Russia had recently dried up, and the robot also seemed to be over budget for the Russians. The payback period was too long and the investment did not seem to be profitable. One of the reasons was the low salary of the pharmacists in the country.

SALE TO A LARGE PHARMACY CHAIN After five difficult years, Mr Katkov’s persistent work and confidence in New­ Icon’s automation devices has started to pay off. The sale of the third medicine storage robot was closed in late March 2017. The buyer was a large pharmacy chain with 83 pharmacies in St Petersburg. “Image plays a very important role in Russia. Companies in Russia spend much more money on interior design, including architecture and art, than they do in Finland. The initial cost of the robot was small compared to the positive effects a modern image has,” Katkov is pleased to say. The fully automatic Iso-Fixu medicine storage robot will be delivered to a pharmacy along the main street of St Petersburg, Nevsky Prospect. It is the flagship pharmacy of the chain, located on the same street with dozens of competing pharmacies. “Another decisive feature was the collection speed of the Iso-Fixu, making it possible to serve the customers faster. If a pharmacy is crowded, customers simply turn on their heels and go to the next one. The silent operation of the robot was also important: The pharmacy is located in a block of flats, and New­Icon had to prove that the robot does not make any noise that would disturb the residents.”