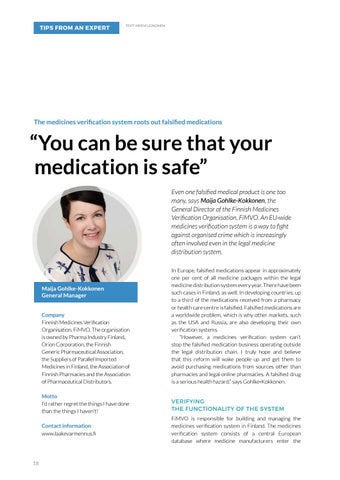 TIPS FROM AN EXPERT

“You can be sure that your medication is safe” Even one falsified medical product is one too many, says Maija Gohlke-Kokkonen, the General Director of the Finnish Medicines Verification Organisation, FiMVO. An EU-wide medicines verification system is a way to fight against organised crime which is increasingly often involved even in the legal medicine distribution system.

In Europe, falsified medications appear in approximately one per cent of all medicine packages within the legal medicine distribution system every year. There have been such cases in Finland, as well. In developing countries, up to a third of the medications received from a pharmacy or health care centre is falsified. Falsified medications are a worldwide problem, which is why other markets, such as the USA and Russia, are also developing their own verification systems. “However, a medicines verification system can’t stop the falsified medication business operating outside the legal distribution chain. I truly hope and believe that this reform will wake people up and get them to avoid purchasing medications from sources other than pharmacies and legal online pharmacies. A falsified drug is a serious health hazard,” says Gohlke-Kokkonen.

VERIFYING THE FUNCTIONALITY OF THE SYSTEM