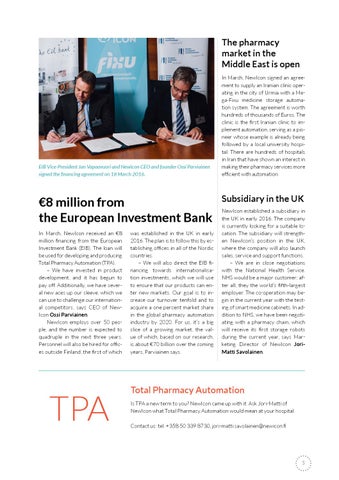 The pharmacy market in the Middle East is open

€8 million from the European Investment Bank In March, NewIcon received an €8 million financing from the European Investment Bank (EIB). The loan will be used for developing and producing Total Pharmacy Automation (TPA). – We have invested in product development, and it has begun to pay off. Additionally, we have several new aces up our sleeve, which we can use to challenge our international competitors, says CEO of New­ Icon Ossi Parviainen. NewIcon employs over 50 people, and the number is expected to quadruple in the next three years. Personnel will also be hired for offices outside Finland, the first of which

was established in the UK in early 2016. The plan is to follow this by establishing offices in all of the Nordic countries. – We will also direct the EIB financing towards internationalisation investments, which we will use to ensure that our products can enter new markets. Our goal is to increase our turnover tenfold and to acquire a one percent market share in the global pharmacy automation industry by 2020. For us, it’s a big slice of a growing market, the value of which, based on our research, is about €70 billion over the coming years, Parviainen says.

In March, NewIcon signed an agreement to supply an Iranian clinic operating in the city of Urmia with a Mega-Fixu medicine storage automation system. The agreement is worth hundreds of thousands of Euros. The clinic is the first Iranian clinic to implement automation, serving as a pioneer whose example is already being followed by a local university hospital. There are hundreds of hospitals in Iran that have shown an interest in making their pharmacy services more efficient with automation.

Subsidiary in the UK NewIcon established a subsidiary in the UK in early 2016. The company is currently looking for a suitable location. The subsidiary will strengthen NewIcon’s position in the UK, where the company will also launch sales, service and support functions. – We are in close negotiations with the National Health Service. NHS would be a major customer; after all, they the world’s fifth-largest employer. The co-operation may begin in the current year with the testing of smart medicine cabinets. In addition to NHS, we have been negotiating with a pharmacy chain, which will receive its first storage robots during the current year, says Marketing Director of NewIcon JoriMatti Savolainen.