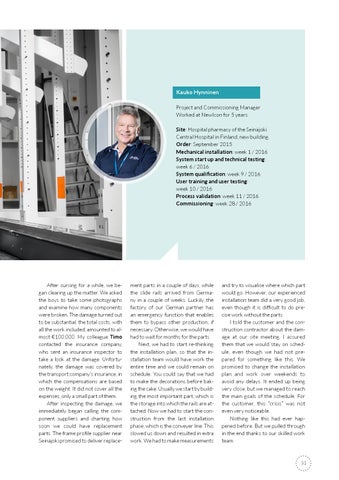 After cursing for a while, we began clearing up the matter. We asked the boys to take some photographs and examine how many components were broken. The damage turned out to be substantial, the total costs, with all the work included, amounted to almost €100,000. My colleague Timo contacted the insurance company, who sent an insurance inspector to take a look at the damage. Unfortunately, the damage was covered by the transport company’s insurance, in which the compensations are based on the weight. It did not cover all the expenses, only a small part of them. After inspecting the damage, we immediately began calling the component suppliers and charting how soon we could have replacement parts. The frame profile supplier near Seinäjoki promised to deliver replace-

ment parts in a couple of days, while the slide rails arrived from Germany in a couple of weeks. Luckily, the factory of our German partner has an emergency function that enables them to bypass other production, if necessary. Otherwise, we would have had to wait for months for the parts. Next, we had to start re-thinking the installation plan, so that the installation team would have work the entire time and we could remain on schedule. You could say that we had to make the decorations before baking the cake. Usually we start by building the most important part, which is the storage into which the rails are attached. Now we had to start the construction from the last installation phase, which is the conveyer line. This slowed us down and resulted in extra work. We had to make measurements

and try to visualise where which part would go. However, our experienced installation team did a very good job, even though it is difficult to do precise work without the parts. I told the customer and the construction contractor about the damage at our site meeting. I assured them that we would stay on schedule, even though we had not prepared for something like this. We promised to change the installation plan and work over weekends to avoid any delays. It ended up being very close, but we managed to reach the main goals of the schedule. For the customer, this “crisis” was not even very noticeable. Nothing like this had ever happened before. But we pulled through in the end thanks to our skilled work team.