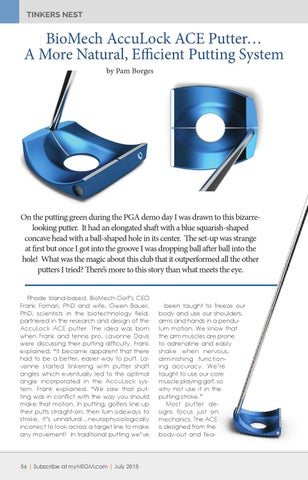 On the putting green during the PGA demo day I was drawn to this bizarrelooking putter. It had an elongated shaft with a blue squarish-shaped concave head with a ball-shaped hole in its center. The set-up was strange at first but once I got into the groove I was dropping ball after ball into the hole! What was the magic about this club that it outperformed all the other putters I tried? There’s more to this story than what meets the eye. Rhode Island-based, BioMech Golf’s CEO Frank Fornari, PhD and wife, Gwen Bauer, PhD, scientists in the biotechnology field, partnered in the research and design of the AccuLock ACE putter. The idea was born when Frank and tennis pro, Lavonne Davis were discussing their putting difficulty. Frank explained, “It became apparent that there had to be a better, easier way to putt. Lavonne started tinkering with putter shaft angles which eventually led to the optimal angle incorporated in the AccuLock system. Frank explained, “We saw that putting was in conflict with the way you should make that motion. In putting, golfers line up their putts straight-on; then turn sideways to stroke. It’s unnatural…neurophysiologically incorrect to look across a target line to make any movement! In traditional putting we’ve

been taught to freeze our body and use our shoulders, arms and hands in a pendulum motion. We know that the arm muscles are prone to adrenaline and easily shake when nervous, diminishing functioning accuracy. We’re taught to use our core muscle playing golf, so why not use it in the putting stroke.” Most putter designs focus just on mechanics. The ACE is designed from the body-out and fea- 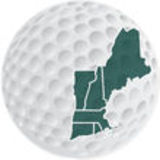